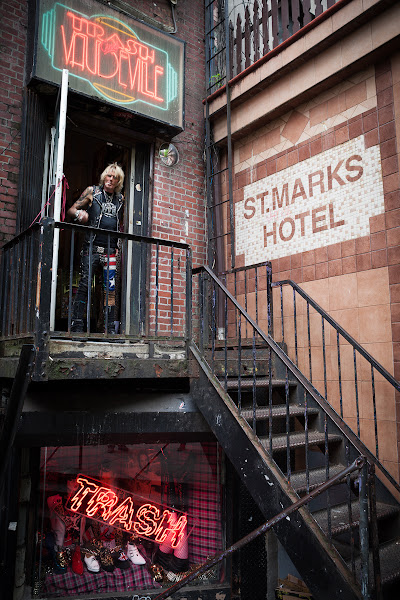 Jimmy Webb, a familiar figure in the East Village during his long tenure as the manager and buyer at Trash & Vaudeville, died on April 14, 2020, of cancer. He was 62.
He started working at his dream destination, Trash & Vaudeville, in 1999, and remained there until the shop relocated from St. Mark's Place to Seventh Street in 2016.  He opened I Need More in October 2017.
On the one-year anniversary of his death, Vogue published an online appreciation of Webb.
Said stylist Bill Mullen: "To his fans and customers and anyone lucky enough to witness him boogie-ing onstage at an Iggy Pop concert, Jimmy was pure magic and a total superstar. Let’s be honest here, nobody held the 'Punk is not dead' torch higher and not even Karl Lagerfeld rocked Agatha Blois custom leather with as much je ne sais quoi. Yet Jimmy will be remembered first and foremost as a sweet and gentle man who loved music and fashion and all combinations of the two for all the most right and true reasons."
The article, which includes an EVG quote, is here.
Meanwhile, the campaign to co-name part of St. Mark's Place after Webb is apparently still in the works. Details here.
Photo from 2013 by James Maher
Posted by Grieve at 2:00 PM

Jimmy was a sweetheart wrapped in black leather... he is missed

What a lovely tribute.

He was one-of-a-kind & the world is that much less interesting without him in it.