A campaign to help 'Clean Up' CB3 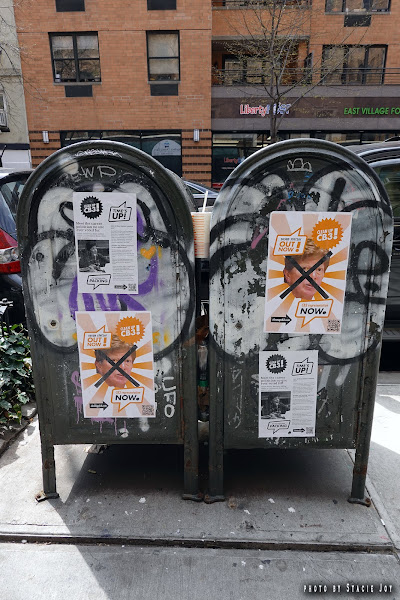 On Tuesday night, flyers arrived around the neighborhood announcing that it was time to "Clean Up" the local Community Board, CB3, and remove Susan Stetzer, the longtime district manager... 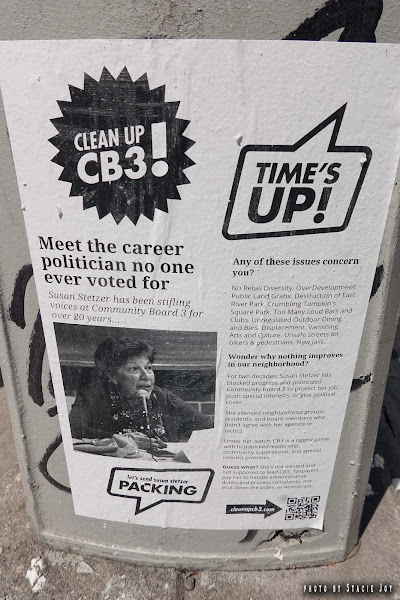 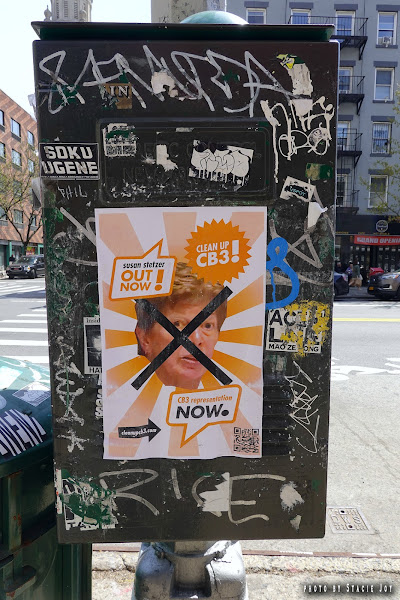 The arrival of the flyers coincides with a newly launched website, which among other claims, states: "The concentration of power at CB3 has effectively silenced citizens, stifled public participation, prevented a diversity of views, and stopped real progress and representation from happening."
The group is going by the Clean Up CB3 Community Commission. Their solution?

When asked to comment on the group's flyers and website, Stetzer said in an email: "One can't engage productively when people are anonymous."
This isn't the first time that Stetzer has been the subject of a flyer campaign. In September 2012, flyers appeared around the East Village and Lower East Side accusing Stetzer of being an "assassin of New York's creativity" who is "wanted for assault on our civil liberties." In the past, she has been accused of being anti-nightlife.
As for CB3 drama ... most recently, in January, 16 community groups and block associations within CB3 signed an open letter to local and state officials requesting an inquiry into the recent removal of Alexandra Militano and Carolyn Ratcliffe as chairs of the SLA Committee and Arts & Culture Sub-Committee.
Photos by Stacie Joy
Posted by Grieve at 6:30 AM

Email ThisBlogThis!Share to TwitterShare to FacebookShare to Pinterest
Labels: CB3, Community Board 3

Did it take a worldwide pandemic for someone to shine a light on the dysfunction that is CB3 for over 20 years? Lower Manhattan residents deserve fair representation locally, our concerns matter as much as someone's who is living in another neighborhood. Of course these folks would need to remain anonymous! Anytime I've gone to a CB3 zoom meeting public participation has been controlled and censored in appalling ways.
The leadership needs to change, that's obvious.

Stetzer’s time is up. 20 years of crushing community voices by one white woman needs to come to an end. Instead of working with neighborhood groups, she positions herself between them and “the powers that be” to push her own agenda — and by her agenda it’s usually the councilwoman or city’s official position. Enough is enough. Virtually every neighbor group or community based org has run afoul with her. This is not how community boards are suppose to operate. And guess what? You can’t elect her out because she got herself installed as a federal employee. But she’s acting outside the scope of her paid position — hence she needs to be removed.

In response to Ms. Stetzer's comment: “One can't engage productively when people are anonymous."

First, it’s not anonymous, it’s a group called Clean Up CB3. Welcome to the world of decentralized systems of leadership and organization.

Second, people have been trying to engage productively with her for 20+ years and it hasn’t worked. That opportunity has passed. Time’s up.

Who is sterzer - is there a bio of her somewhere? How do people get on CB3 & how do they stay in power? Are these officials elected somehow, or do you have to be friends of theirs to get on? Been in the hood 25 yrs but have only started paying attention in the last few.

Good thing there are no contradictions in that little grouping of words.

I don't know, I agree with some of the things they want changed but it's kind of fucked up to single someone out on a flyer and it's kind of cancel culture-like.

How about a detailed list of what's wrong with her tenure. Even if it's just a compendium of personal snubs that would at least be funny.

NYC politics isn't much different from that of a corrupt third world country.