On the CB3-SLA docket tonight: applicants for the former Brazen Fox and Loverboy spaces 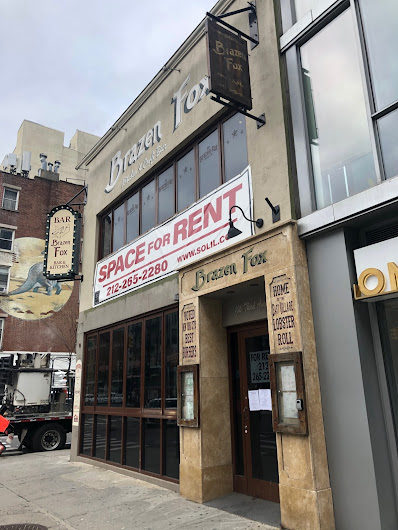 Tonight is the second of the two CB3 SLA committee meetings for April.
Here's a look at a few of the items on the agenda:
• Entity to be Formed by Curt Heugel, 106 3rd Ave (op)
Hospitality veteran Curt Heugel's Host Restaurants, whose portfolio includes concepts such as Bill's Townhouse, Campagnola and Printers Alley, is behind a new unnamed venture for 106 Third Ave. at 13th Street.
The questionnaire for the space shows proposed hours starting at 10 a.m. with a 4 a.m. close (the outdoor cafe portion would have an 11 p.m. curfew).
Heugel and his partners also operate Jackdaw on Second Avenue at 13th Street.
This two-level corner space was home to the Brazen Fox, which closed during the pandemic.
• Entity to be Formed by Michael Perry, 127 Ave C (op)
A new venture called Two Perry's is in the works for 127 Avenue C at Eighth Street.
The space would be a cafe offering breakfast and lunch during the day with a bar-restaurant service in the evenings. According to the questionnaire on file at the CB3 website, the proposed hours are 7 a.m. to midnight, with a 2 a.m. close Thursday through Saturday.
Loverboy, specializing in pizza and slushy drinks, closed here during the pandemic after nearly three-plus in business.  Before Loverboy, the corner space was home to multiple establishments, a list that includes Lumé, the "Epicurean drinkery," ... Life — Kitchen and Bar … which had taken over for Verso. Other restaurants here in the past nine years include Caffe Pepe Rosso and Caffe Cotto. 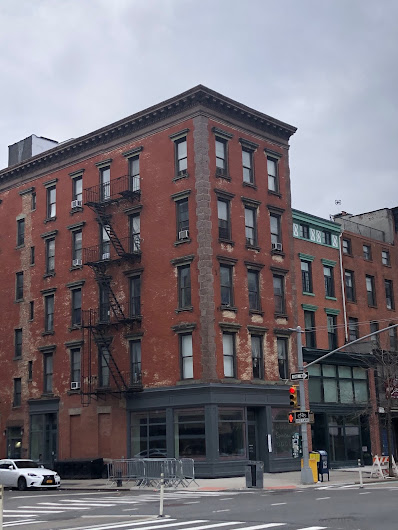 Items not heard at Committee
• Sushi by M (Sushibym2 LLC), 300 E 5th St (wb)
Sushi By M, which currently offers an omakase experience from a compact space on Fourth Street between Second Avenue and the Bowery, is moving to a more high-profile spot on the southeast corner of Second Avenue and Fifth Street (last occupied by Spiritea, and pictured above).
This larger space for Chef Tim would include six tables (seating 12 patrons) and a sushi counter for 16 guests. The daily hours are listed as noon to 11:30 p.m.
• Woman in Wine LLC, 413 E 12th St (wb)
Alessandro Trezza, whose establishments include Have & Meyer in Williamsburg, is opening a small plates/dessert and wine bar at 413 E. 12th St. between Avenue A and First Avenue.
The questionnaire shows daily hours of 4 p.m. to midnight. The document includes a sample menu.
This mid-block space was previously Zadie's Oyster Room.
Tonight's meeting starts at 6:30. You can find the Zoom info here.
Posted by Grieve at 5:15 AM

Great to see these spaces already targeted for re-opening! The neighborhood will be back to its fully vibrancy soon.

Brazen Fox space as it WAS used (and presumably will be used in the future, if this is approved) has been a lousy neighbor with insane noise levels. As if the louder it got, the more desirable it was to go there. NO consideration whatsoever for people who live in the area.

I'm not happy to see Third Ave. on the cusp of being returned to Drunk-bro Avenue below 14th St. Why is it ALWAYS about money for the bar owners, and NEVER about quality of life for the permanent residents?

I want to sarcastically thank CB3 in advance for what will surely be their rubber-stamp of these applications.

Brazen Fox still has its original location in the City of White Plains in the Hudson River Valley.

Maybe we could see a few drinking holes that brand themselves as breweries in the city in the near future which are a thing north of the city.

Agree with Anon at 9:40! The Brazen Fox has not been missed. It sucks to see this 4 AM proposed closing time. Ugghhhh.

Bad Actors (just why are so many of the bars really terrible neighbors) aside, it's GREAT! to see the nabe's many vacant storefronts reoccupied and closed for pandemic spots reopening now if we can just put and end to the roof top brofests!, soon we might have some semblance of the good ole east village back

Agree about the roof parties. Landlords should be fined when private residences run club level sound systems outside or right in front of open windows.

Jackdaw has always been super busy even when things were slow everywhere else. Never went but always felt good to walk buy a place that was active.

I live on the Brazen Fox block and whilst I was not a fan of the place [because i am not under 22 and do not attend NYU and have better things to do on a Sunday afternoon than watch lycra clad men rub themselves against each other in the name of sport] it did not disrupt my quality of life.
I walk past Jackdaw everyday with the dogs and if the new addition to 13th / 3rd is run like that place we will be fine. That place is lively and clean.
What positivity for a Tuesday morning.

Revived (nuisance)commercial establishments will probably not see an end to (nuisance) roof parties. Not only should landlords be fined as @4:17 suggests architects who build these spaces in otherwise quiet areas should be discredited.