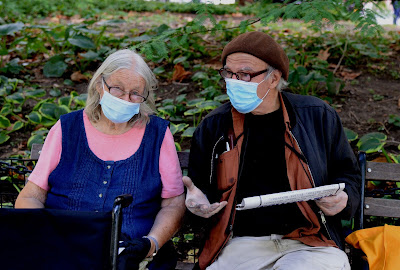 Longtime East Village resident Arthur Farrier, founder of Bookleaves used and rare books in the West Village (now Left Bank Books), passed away on March 25. He was 80. A cause of death was not revealed.
Here's more information from his published obituary:

Arthur cherished all his many friends and fans from Bookleaves and the tight-knit NYC booksellers community.

Born in the Bronx, he was a proud graduate of Stuyvesant High School, a U.S. Army veteran who was antiwar, a New York cabbie, a longtime East Village resident, and an accomplished abstract photographer.

Bookleaves was part of a New York Times feature from 2003:

Stocked with out-of-print books, it is a browser's nirvana. People bring in dusty boxes, and the owner, Arthur Farrier, sorts them.
''I have the smallest inventory in the Western world,'' said Mr. Farrier, who spent 20 years driving a cab before he got tired of complaining about disappearing bookshops and opened one of his own. ''The odds against finding a book here are tremendous.''
Mr. Farrier is in danger of becoming a Village character. He affects a beret over a mane of white hair — he calls it a poor man's toupee — and he is a mine of Greenwich Village lore.

Felton Davis of Maryhouse on Third Street shared the above photo of Farrier with his friend Marianne Goldscheider sitting in Washington Square Park.
"Most of us are, sadly, always running around from one thing to another, but if you had the time, those two had the memories," Davis told me in an email.
Goldscheider, an activist and writer, "is carrying on bravely in her late 80s," though she is now in a senior-care facility near her family in Massachusetts.
Posted by Grieve at 5:30 AM

I used to see him often hanging with Marianne, another true EV character. Sad news.