Turns out there is a value engineering study after all.
In January (first reported here), following a Freedom of Information Law (FOIL) request by advocacy group East River Park Action, NYC's Department of Design and Construction (DDC) stated that the city's value engineering report could not be sent because: "DDC's search of agency records revealed no responsive documents for [the FOIL] request."
The value engineering study is the oft-cited factor behind the city's change of plans in September 2018 to bury/elevate East River Park by eight feet as part of the East Side Coastal Resiliency Project.
According to an email from East River Park Action on Sunday, the group appealed their original FOIL request, and on Feb. 11, the DDC released the three-year-old report.
However, per East River Action: "the report is heavily redacted. Here's a good page. Note that the disadvantages outweigh the advantages..." 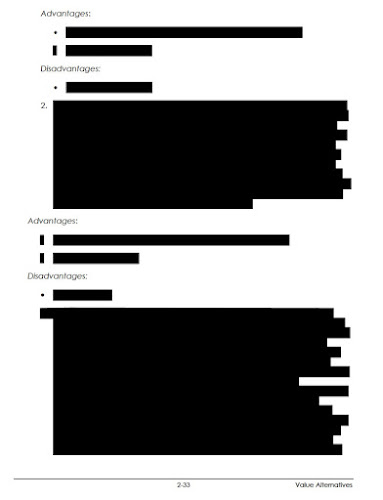 Back to the East River Park Action email:

We need to see an un-redacted report. We also strongly support the NYC Group of the Sierra Club, which "calls upon the City Council's Committees on Environmental Protection and the Council's Parks and Recreation Committee to hold a joint oversight hearing on the East River Coastal Resiliency Project or ESCR" to get to the bottom of the “secrecy, inadequacy, and sequence of events and information releases [that] have left many perplexed and disturbed.”

The 347-page Value Engineering Study for the Office of Management and Budget is available here. The 31-page Report of Findings is available here.
The city's current plan, which has been met with outrage by community members, will raze the 57.5-acre East River Park, bulldozing 1,000 mature trees and rebuilding the park atop eight feet of landfill meant to protect the Lower East Side and surrounding neighborhoods from a 100-year-flood event and sea-level rise.
In October 2019, the city announced that they would phase in the construction so only portions of the park are closed to the public at any given time. According to various reports, the city has committed to leaving a minimum of 42 percent of East River Park open to the public. It is projected to be complete in 2025.
The start of construction, which had been slated to commence this past fall, was delayed until this spring, according to a recent presentation the city made.
But after seeing the redacted report, East River Park has many outstanding questions for the city to answer.

Our many ACTIONeers have pored over the plans and have found fatal flaws that will damage our neighborhood's well being for years to come. We must have transparency, accountability, and community involvement in a revised plan.

Thank you to all our community activists who are keeping after this. The inability of our elected officials to tell things straight is particularly troublesome. I don't know whose wisdom is at play here, but I'm dismayed by it. Why on Earth conceal any plan about public space? As disgraceful as it is, I'm buoyed by those using FOIA to show how elected officials have essentially abdicated in favor of some other power.

Anything redacted, looks like a cover up. They don’t want anyone knowing their true intentions. Which means it is not good.

Thank you EV Grieve for Publishing this!, The park is a boondoggle with a bad plan, escalating costs, and was bait and switch from the original plan we agreed to....the redactions are alarming! we need to Stop this now!

It looks like the GOP is running NYC and a huge scam is on to bilk taxpayers for a project which detail's are being hidden from the people.

Wow, living through the Cold War prepared me to recognize this sort of state-level dishonesty and lack of respect for the public, but not on *this* side. This is horrific. Agree with the previous commenters: thanks to the East River Park activists and EV Grieve for not letting this go.

This is the most LITERAL kind of cover up, and as a "response" to a FOIL request, it's also an insult to every taxpayer in this area.

IMO, *somebody* must be on the take here, otherwise the information wouldn't be such a secret...

Carlina Rivera hasn’t said a word about it which is very concerning.

nothing fishy going on here!

Why would a public report be redacted? Unbelievable. This stinks of corruption on the part of the Mayor's office.

The idea of razing all of that nature that grew for decades, to make a fake plastic bullshit park like they do now, is disgusting no matter what.

What was wrong with the previous plan with a wall under the FDR again?

I smell a rotten egg. All of this sounds like utter BS

Any scam being perpetuated is being done by the current administration which is certainly NOT the GOP. Not that they would do any better of course.

@10:44am: I presume what was wrong was (a) it didn't provide "full employment" to consultants, and (b) it didn't line de Blasio's pockets in some way. The level of trust I have in current NYC government is far, far below zero.

What does the city claim the redactions are ostensibly needed for?

More like typical. Reminder, Carlina sold us out on the 14th Street Tech Hub too and now remains silent about this. Vote Erin Hussein

Right?!? It's not a CIA operation, it's a report about a public park!

Please let us know, what was the
'original plan?' What do you mean by a wall in the river? What are our alternatives to losing those ancient beings, the mature trees?

Remember the last boondoggle, the L-train tunnel renovation, that was supposed to be unavoidable, and would have disrupted the city for 2 years. Turns out that it was all solved by a pretty easy fix. Outside auditors are key because NYC agencies are incompetent, far behind other major cities,and are mired in corruption. This report must be released immediately, and our local officials should be looking into this. This park is an absolute necessity for our community! They would never pull this shit in a wealthier area.

Please somebody sue the city for the full report.

I just looked at their "Vision" for the Park. I can see no trees in the park. Only shrubs. There are trees across the highway, and maybe next to it, but not in the park. They really do plan to remove all the trees -
https://www1.nyc.gov/assets/escr/images/content/hero/flyover.jpg

and of course get rid of that bandshell.

A lot of these redactions are extremely dubious and would likely not hold up in a court challenge. Blocking out, for example, the names of meeting participants - really? East River Park Action should waste no time and appeal the City's failure to release the records without unjustified redactions. Chances are, East River Park Action can get reasonable attorney's fees under section 89 of the Public Officers Law, which includes this a provision that the court "shall assess, against such agency involved, reasonable attorney's fees and other litigation costs reasonably incurred by such person in any case under the provisions of this section in which such person has substantially prevailed and the court finds that the agency had no reasonable basis for denying access."

It's outrageous that such an expensive and disruptive plan rides on one elusive and heavily redacted report. De Blasio and all the elected officials (looking at you, Rivera and Chin) who have supported this bait-and-switch have shown nothing but disregard and lack of caring for our underserved community who will be so heavily impacted by the construction, pollution, noise and lack of access to green space for years to come (not mention lack of interim flood control or understanding of community needs, such as seniors needing shade; kids needing field space; LES workers commuting via bike to midtown and Wall Street; people fishing and foraging during these times of food scarcity; musicians, dancers and poets needing open outdoor space to practice; and so much more. If our elected officials actually spent any time in the park, they would see how our community depends on it SO much more than, say, unrestricted traffic flow along the FDR... This project makes me wish I lived in a better city that actually cared about itself.

Does anyone else smell developers and REBNY lurking behind the support for this horrendous plan? There is literally no guarantee that 100% of the acreage must be returned to park use. So 5 years from now when the project is behind schedule and running out of money, who will be waiting to “save” the park with one of those “private/public partnerships” that are really just a cover for handing public assets to private entities? The city will hand over a dozen or so acres for luxury high rise condos and we’ll be told “it’s the only way” to get any of our park back. The original plan was cheaper, better for the community, and doesn’t leave us exposed to both flooding and the back door theft of our park.

Keep up the good fight! We need total transparency about this shady turn of events. Save our beloved park and donate to the legal fund as Flipper posted.

Good article on Erin Hussein, who is running for City Council, and is very much against this abomination:
https://thevillagesun.com/exclusive-erin-hussein-enters-district-2-race-vs-carlina-rivera

We, some of the restaurant owners have drafted a letter for the DOT because the project affects the businesses along Avenue C as well. (They’re making additional protective bike lanes?); How about we set up a date (3/27, Saturday 11am-2pm) at the Tompkins Square Park, Main Square by the Christmas Tree, and send out the letter to the DOT, Local officials and the Mayor...?

INFILL THE FDR INSTEAD

Thank you for sharing this.I am not one of the most active members of East River Park Action, but I have participated and helped a little.
Too many people don't know unfortunately about this project.
Hopefully this will not happen and we will keep our park.

Picket, March, Protest etc will all be wasted effort/energy.
This will move forward as planned, regardless of action.

This is what terrified me too… so 42% of the area will still be park… what about the other 58%? Riverside homes for the highest bidder?