Plywood report at the former P.S. 64 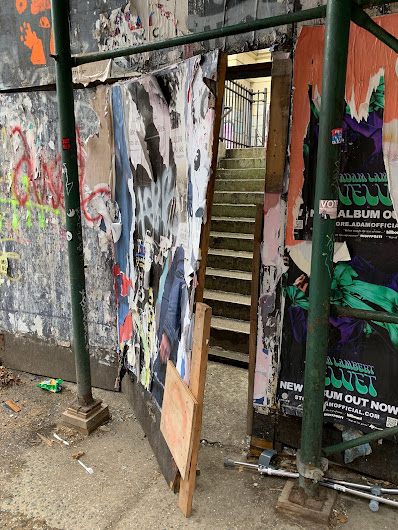 On Monday, we noted that the high winds over the weekend took out a window atop the former (and long-empty) P.S. 64 building — on the 10th Street side between Avenue B and Avenue C.
Now, a reader today points out another opening: on the plywood on the Ninth Street side. There have been reader reports of kids breaking the windows from inside the plywood perimeter... 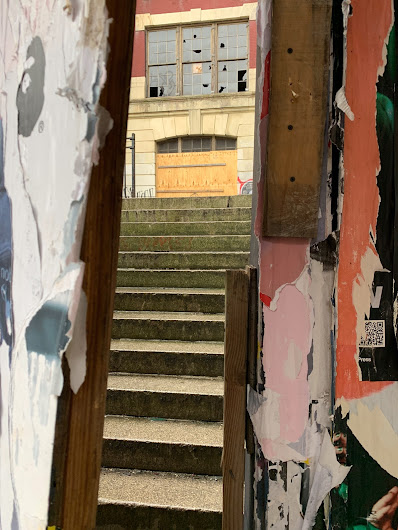 And 20-plus years of history in two paragraphs:
Developer Gregg Singer, who bought the property from the city during an auction in 1998, has wanted to turn the building into a dorm called University Square. The DOB continues to maintain a Stop Work Order — dating to August 2015 — on the property.
In years past several local elected officials, community activists and residents have asked for the return of the building for community use. The building became the Charas/El Bohio Community Center after the school left in 1977. The group was eventually evicted when Singer took over as the landlord. It has sat empty these past 20-plus years, causing locals to be concerned about its crumbling façade.
Posted by Grieve at 5:00 PM

This is all a big planned scam.
The net result to be that the building will eventually be condemed, and then demolished, and replaced with a beuuuuuutiful steel and glass hotel-office-tech center.
Mark this post.

yes real estate is long term business . the Developer will just wait out the neighborhood in 5 years most will have forgotten this history of this building and will be glad that the developer is getting rid of "neighborhood eyesore".

de Blasio should have done eminent domain YEARS AGO already.

But you are wrong that people will forget the history of this building - many of us have lived here for decades, and we have long memories indeed. It's the young & transient who don't know or care about this situation.

"But you are wrong that people will forget the history of this building - many of us have lived here for decades, and we have long memories indeed."

Most people in the neighborhood don't even know the building is landmarked; Anonymous at 8:20 probably also thinks the former CHARAS is as disposable as the post-modern hellhole he lives in.