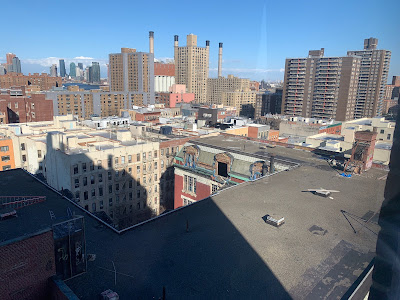 An EVG reader shared these photos... showing an open window on the top floor of the former (and long-empty) P.S. 64 building — on the 10th Street side between Avenue B and Avenue C... 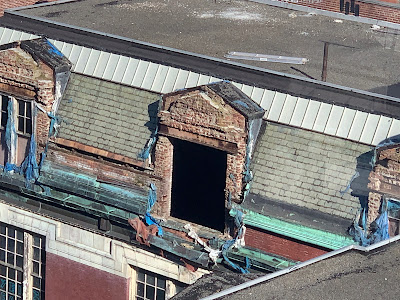 The reader, who reports seeing people on the roof here fairly often, believes yesterday's gale-force winds KO'd the window.
Developer Gregg Singer, who bought the property from the city during an auction in 1998, has wanted to turn the building into a dorm called University Square. The DOB continues to maintain a Stop Work Order — dating to August 2015 — on the property.
In years past several local elected officials, community activists and residents have asked for the return of the building for community use. The building became the Charas/El Bohio Community Center after the school left in 1977. The group was eventually evicted when Singer took over as the landlord. It has sat empty these past 20-plus years, causing locals to be concerned about its crumbling façade.
Posted by Grieve at 1:00 PM

So he wants to sell it to everyone's favorite real estate holding company: NYU

What would it take for de Blasio & his minions to TAKE ACTION on this building? Singer should forfeit the property; his BS has already gone on for decades.

Let the city take it by eminent domain, and then let Singer spend the rest of his life & his money trying to get it back. It's a lawsuit Singer would lose.

The lack of care for this building is ridiculous - the building just east of it has been evacuated at least once in the last few years because of the crumbling facade. Additionally, you can often see teenagers running around inside up and down the staircases and I always worry someone will get hurt.

There's less unauthorized traffic in this building these days than in the past but once the weather gets warm I suspect we'll get full on raves as the NYPD is standing down where parties and noise are concerned, either on instruction from above or their own disengagement.

"What would it take for de Blasio & his minions to TAKE ACTION on this building?" - Oh cut him some slack, Anon. 2:46, after all, it's only been 3.5 years since he swore at a local Town Hall that his administration would take PS 64 away from Mr. Singer - after all, he didn't say what century that might happen.

Gregg Singer is praying something catastrophic happens to that building through this clear decades-long neglect as are his enablers Madison Realty Capital probably. And where are the officials to do something about this? Years of open windows and cut roof and rain and snow damage and a fire this winter. Where is the city council member? Where is the mayor? City should just take it back already.

That building is an eyesore and should have been torn down years ago. I have often seen police cars in front after they received calls of trespassers usually young kids who have broken into the building to hang out. The place should be demolished.

Why has this building not been squatted???

A neglected beautiful building left to breed more darkness when it could be filled with the light of art making and a growing community. G. Singer and his lawful posse were probably once told their finger paintings were no good. Oh, the shame, the shame!

Despicable behavior by a Singer. He obviously doesn't need the building or the money it represents, he would gladly destroy a neighborhood resource apparently simply to satisfy his own sense of entitled righteousness.

at this point, the building is toast.

Have raves been an issue in this building in the past?