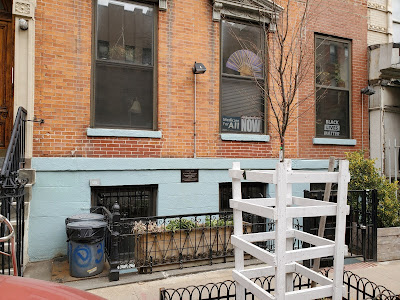 This plaque arrived last week outside 39 E. Seventh St., the longtime home (1963-2020) of Carol Joyce and her husband Bob here between Second Avenue and Cooper Square ... 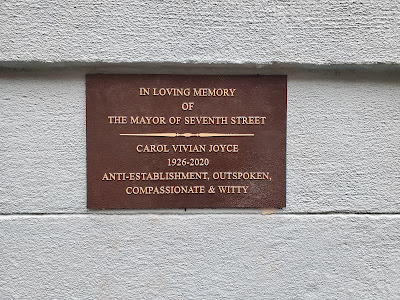 "In Loving Memory of the Mayor of Seventh Street."
She's remembered here as "anti-establishment, outspoken, compassionate & witty."
In the early days of the pandemic last March, she and her husband stayed at a cousin's country home. While away from the city she died of cardiac arrest on March 22, 2020. She was 93.
Jonathan Ned Katz, a longtime friend, wrote an essay about Carol at OutHistory.org.
She was born in the Bronx on April 1, 1926 ... and later graduated from Washington Irving High School.
Carol taught textile design for many years at the School of Visual Arts, and she wrote several books on the topic.
Here are few a excerpts from the essay:

Carol spent her adult life in Lower East Side rentals. In the 1980s, she and Robert Joyce founded the E. 7th Street Block Association which had trees planted, increased street safety and garbage pick-ups, and brought neighbors together at street fairs. Carol fought against gentrification, sometimes winning long battles to keep the heights of new buildings scaled to the neighborhood and protecting old brownstones from being demolished for high rises.

I always viewed Carol with a bit of awe, as a wondrous, fantastical creature, a quintessential New York character. Bob Joyce said it this way, recalling his wife as "a New Yorker born and bred, with no tolerance for hypocrisy..."
Her only shortcomings, he noted, were that "she did not drink wine or eat pasta." He called her "the love of my life."

You can read the full essay here. Bob Joyce is now living upstate with relatives.

Thank you to Dinky Romilly for the photos!

I hope and pray to be remembered as Anti-establishment. Godspeed Mrs Joyce. I don't get what is so great about wine either.

Didn't know her yet after reading the essay I miss her, what a interesting person and a fantastic neighbor!

I miss you fairy godmother. I will love you forever. Happy Birthday!

I remember Carol from taking her textile design class at SVA. She wore chic dark sunglasses always , even though it was a night class. She was brilliant, kind, talented and a fantastic educator. Bravo