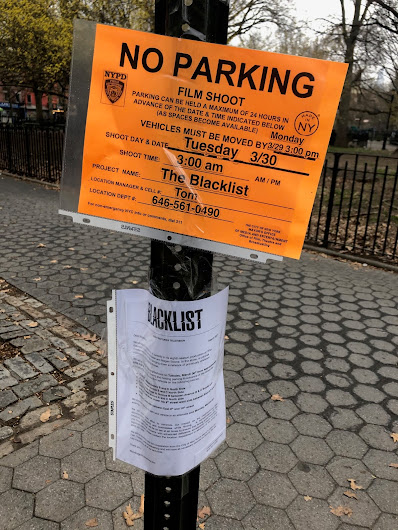 The NBC series "The Blacklist" makes a return to the neighborhood today...  the FBI show starring Megan Boone and James Spader — now in its eighth year — has filmed in and around Tompkins Square Park multiple times through the years (2014 ... 2017).
Signage today points to a shoot around (or in?) the Park... with production vehicles parked on parts of Seventh Street, Eighth Street, Ninth Street and 10th Street.
Also returning this week... "Russian Doll" (still going as "Black Gumball" on film notices)... looks to be filming in multiple locations... with notices up along several streets and avenues... including in and around St. Nicholas of Myra Orthodox Church on 10th Street and Avenue A... 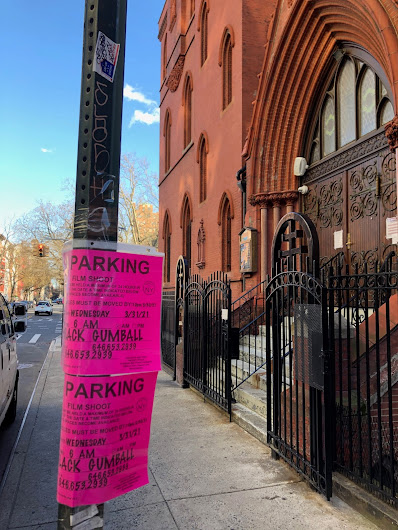 ... whose exterior doubled as Maxine's apartment building, where the party never stopped.
Aside from "The Blacklist" and "Russian Doll," here are the other TV shoots around here in 2021:
• "FBI"
• "New Amsterdam"
• "Pose"
Posted by Grieve at 5:00 AM

Email ThisBlogThis!Share to TwitterShare to FacebookShare to Pinterest
Labels: filming around the East Village, Russian Doll

Oh great. Just what I was missing, a bunch of walkie-talkie clad misanthropes telling me that I can’t walk here.

And those who _live_ on the block have to put up with 24-hour trailer truck generators and lights. Like who needs to sleep?

When I question one suburban idiot sleeping in the cab of the truck (from Manasquan, Long Island) about turning off the generator, he replied, indignantly, that, cant you see, you low life, we are making a movie! How dare you question . . . Netflix.

We cant seem to get a break. And now a fourth wave.

10:05, Manasquan is in New Jersey, not on Long Island, but cool story

I meant Massapequa. I get the Massas-Manas mixed up.

I think he meant Massapequa!

Or perhaps you have no idea where this sleepy yet indignant defender of digital cinema is from because he is fictitious, no?

Manasquan is not really suburban btw.