The last days of the former B Bar & Grill 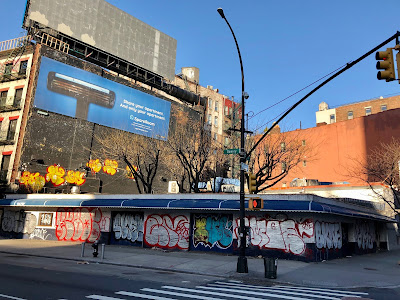 The one-level structure that housed B Bar & Grill (1994-2020) awaits demolition on the southwest corner of the Bowery and Fourth Street.
Meanwhile, several people have noted the unglamorous ending for the one-time hotspot... the exterior walls now a high-profile spot for tagging... 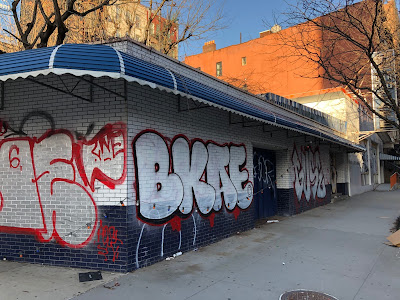 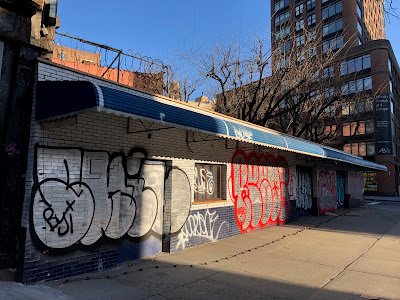 As we first reported in January, permits were filed for a 21-floor mixed-use development — a 283-foot-tall office building. According to the proposed plan, the well-employed architect Morris Adjmi's building will encompass 98,799 square feet, with 26,000 square feet set aside for use as an unspecified community facility.
CB Developers paid $59.5 million for a stake in 358 Bowery, previously a gas station before its conversion into the bar-restaurant. B Bar owner Eric Goode, who owns a handful of hotels, including the Bowery Hotel across the way, assembled air rights to build the larger development on this corner space.
As for the B Bar, it was expected to close for good this past August. However, the bar-restaurant never reopened after the PAUSE. As we reported back on April 3, 2020, nearly 70 B Bar employees were laid off without any extension of benefits or offer of severance pay.
Previously on EV Grieve:• CB Developers pay $59.5 million for an interest in 358 Bowery — current home of the B Bar & Grill and likely a new development• B Bar & Grill lays off its staff without severance
Posted by Grieve at 5:00 AM

Email ThisBlogThis!Share to TwitterShare to FacebookShare to Pinterest
Labels: B Bar & Grill

Imaging if a few plain clothes police officers just sat in a car here every night how easy it would be to catch the jerks doing this tagging.

Why would you want people to be imprisoned for painting on an abandoned building set to be demolished?

And just this morning they had a report on the news about how 16% of the office buildings in Midtown are currently pretty much empty, with companies rejiggering how they operate and letting more of their employees continue working from home. They didn't even talk about downtown and the Financial District, also struggling with more office space than tenants. Trying to figure out who would want to have their offices in this location at this time.

Why bother? Cops should be more concerned about the drinking clubs opening up after hours in apartments all over the village every weekend.

@9:12am because it's a blight on the city that is not just a problem on this building. Graffiti leads to more graffiti and it costs small businesses and property owners tons of money to deal with constantly. Look at all of the poor bar/restaurant owners who have built expensive sidewalk dining only to have it immediately tagged. Ditto for store owners with gates and building owners with brick/stone work. I can't believe the apologists for a--holes that think it's their right to deface someone else's property.

I never went to the B Bar & Grill it was just not one of the places that I frequented on the EV/LES but the thought of a ugly 21 story monstrosity of a building being built on that space blocking out the sun and sky is just a terrible thing for the entire neighborhood.

Why build an office tower when there is already a glut of unused commercial space in NYC?

I had some crazy times at Bowery Bar back in the mid-90s. Another “End of an Era” type closing for me. There really isn’t much left of the mid-90s nightlife spots that served as the backdrop of my 20s and 30s. *sigh*