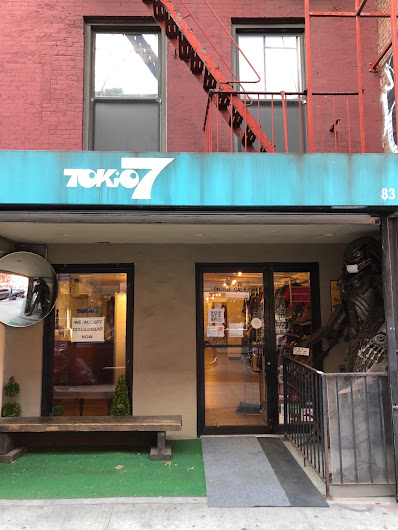 Tokio7, the consignment shop on Seventh Street between First Avenue and Second Avenue, reopens to the public today.
Since January, they had only been selling online and taking in-person appointments.
Moving forward, they'll be open from 11 a.m. to 6 p.m. daily... only five people inside at a time... and cash only at the moment.
The shop closed late this past August ... several months after someone looted the place.
Tokio7, which sells second-hand designer and vintage clothing, shoes and accessories, debuted on the other side of Seventh Street in 1996 ... before moving to this location in 2010.
Follow them on Instagram for more info.
---
And if you're on this block, you could swing by Enz's. Owner-designer Mariann Marlowe opened her rockabilly and retro clothes shop at 76 E. Seventh St. in December.
Marlowe had previously operated the shop at 125 Second Ave. between Seventh Street and St. Mark's Place for 18 years after relocating from St. Mark's Place. (The store dates to the 1970s on Grove Street.)
Posted by Grieve at 9:00 AM

Email ThisBlogThis!Share to TwitterShare to FacebookShare to Pinterest
Labels: Tokio7

I like Tokio7 but nothing is like the original smaller quaint below ground space across the street however it was pre mass internet and online shopping options so most unsold designer clothing went to brick and mortar establishments like Tokio7 or sample sales (google it youngins) for us New Yorkers instead of now going online for everyone... still glad to see another business come back 👊