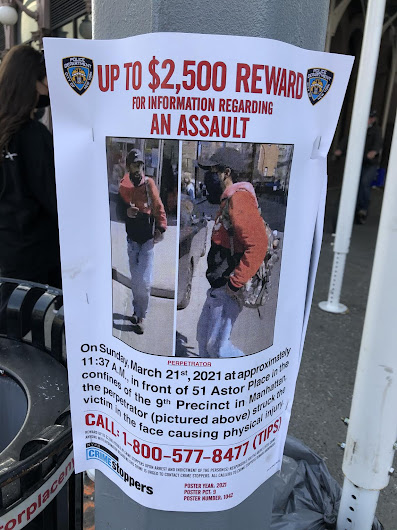 The NYPD has arrested the suspect wanted in connection with the assault of an Asian woman Sunday morning on Astor Place.

The NYPD said they arrested 27-year-old Erick Deoliveira last evening. He has been charged with a hate crime assault and criminal mischief as a hate crime, per ABC 7.
According to Gothamist, the man approached the woman, asked for her protest sign, then tore it up. When she asked why he did that, the man allegedly punched her in the face twice, then fled into the entrance for the uptown 6.
A Good Samaritan who chased after Deoliveira told ABC 7 that the suspect "dropped his underwear and showed his genitalia to everyone on the platform."
The 37-year-old victim, who was on her way to a demonstration against anti-Asian violence with her daughter, suffered cuts and bruising to her lip, and a sprained ankle while trying to chase the assailant.
Posted by Grieve at 3:00 PM

I am so glad they caught this guy and I am proud of the bystanders who got good photos and videos of him. I wish we could do more for the woman who he punched and her little girl.

Thank the lord he captures and charged with hate crime

Sounds like he needs serious help. A lot of the random attacks on the streets and in the subway are by crazies, since funding has been slashed since the 80s for mental health issues.

These attacks are so often dismissed as the result of a mental health issue. But this guy chose to target her. He stomped on her sign to show his disrespect for her as an Asian woman and he punched her in the face twice when she dared to say something to him. And this happens to Asian people, especially women, every single day in this country.

I'm glad this vile person was caught, and I hope that woman and her child will be okay.

If this jerk got half-naked on the subway platform, that would have been the perfect time to tackle him to the ground. And maybe mash his penis into the concrete for good measure; might take him out of action for awhile, though hopefully the penal system will do that for us now.

Way to keep a low profile after an assault... Glad this guy was caught.

Good. I hope he enjoys all the comforts of Metropolitan Detention Center. The Vietnamese restaurants located right across the street are fantastic, although I doubt they deliver to the jail.

Now they need to round up the Essex Market Karen who verbally abused a black cashier at Davidovich Bakery on Sunday. She has also been seen confronting people at Union Square with a bunch of anti-mask protestors. Gothamist and the Daily Mail gave her the full treatment. Via the Daily Mail:

Giovanni..Bagel Karen was identified. She lives down here. A few months back she went off on me when I told her to look out or put a mask on when she was pushing and shoving her way down a sidewalk on Avenue A near the park. I recognize her, the kids and most definitely that annoying Karen voice.

She called me a "Beta Male" and was screaming Covid was a hoax. Among other things I cant write here. I hope someone is looking out for those kids. That's a dangerous person! In the words of her leader...Lock her up!