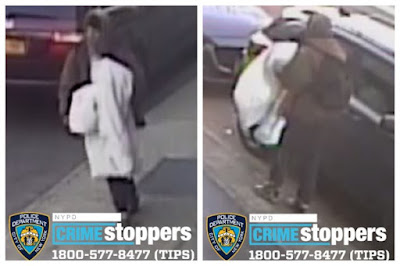 The NYPD's Asian Hate Crimes Task Force is reportedly investigating an assault yesterday morning in which a 66-year-old Asian man was punched on Allen Street just south of Houston...

Since this morning, Detectives @NYPDHateCrimes have been investigating the following: On March 20, 2021 at 8:55 AM, at 196 Allen St, a 66-year-old Asian male was approached by a male who yelled at him and then struck him in the face. See pics. Call or DM @NYPDTips with any info. pic.twitter.com/3dXYni2BEq

The unsuspecting victim parked his car in front of 196 Allen St., near Houston Street, around 9 a.m. and was checking to make sure he was in a legal spot when the attack occurred, an NYPD spokesman said.

The police and witnesses described the suspect as homeless. Witness Kat Lam told the paper:

"The homeless man started charging after the elderly gentleman, saying things like, 'If I ever see you around here again, I'm gonna beat your ass.' And, 'I'm just going to beat your ass right now,'" Lam recalled. "He just socked him right in the face, right above the eye. You could tell that this older man was in complete shock. He was just frozen."

The Post reports that the NYPD has recorded a 1,300 percent increase in anti-Asian hate crimes during the pandemic.
Gothamist (link here) has more on this story and details on #StopAsianHate rallies today.
Posted by Grieve at 1:00 PM

Society has de-evolved ever since trump was in office. I do not condone fighting but I have no problem with people defending themselves. Like that 76 year old asian grand mother in San Fran

Thank you for posting this. We need more awareness on hate crimes based on racist motives.