Reader report: Someone stole USPS key keepers along Avenue B 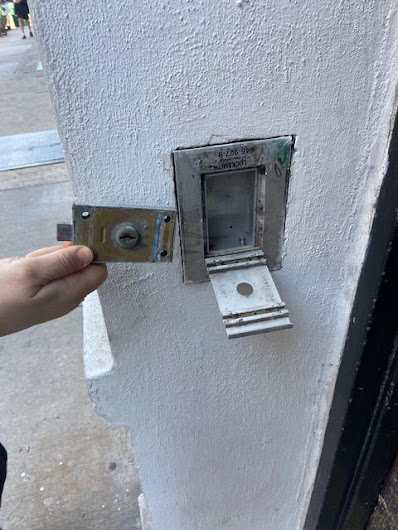 An EVG reader who lives on Avenue B between Sixth Street and Seventh Street reports that someone stole the USPS key keeper that holds the building's lobby key on Saturday night.
Per the reader:

As one walks up Avenue B, you can see several buildings had this happen. A kid's scooter was stolen from the lobby of our building, and clearly people are getting desperate to do this kind of break in as it takes some effort. We're going to file a police report but just thought your readers might chime in if they have similar experiences or should be made aware.

The locksmith had to come and change all the locks... and the USPS has to replace the lockbox.

It is annoying more than anything. I think people are just really desperate.

Why aren't there any cops patrolling at night?! It is so obvious that theft/break-ins/graffiti/etc will happen. Like, just post up in an unmarked car on any avenue and you'll see one of the above. So infuriating

Because there are cops in marked cars driving through Tompkins square park during the day.

We had this happen last year in our building (we are much closer to 3rd Avenue).

I wonder WTF de Blasio does all day, b/c he's letting vandalism get the upper hand.

DeBlowsio is busy getting ready for a run at the Governor’s office.

Anon. 8:53PM, DeBlahblahblah can be seen every day, almost all day (or so it seems) on NY1, gloating about his arch-nemesis Cuomo's fall from grace, and blathering about utter nonsense. He is never to be found actually doing boots-on-the-ground work to, y'know, benefit his constituents, or anything radical like that.

I guess de Blasio thinks being incompetent at the city-level qualifies him to "fail upward" to Albany - but he's dead wrong about that. I'm thrilled that he's term-limited out as mayor.

Citizen shows break in today on 5th been a and b. Wondering if related. Loc your windows kids!