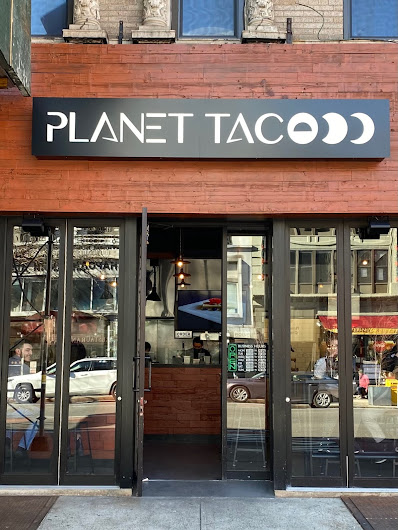 The menu became bewildering in its length. There are 13 Mexican tacos, 3 tacos representing American cities, 4 national tacos, and 3 named after planets. As if that weren’t enough, 11 sauces are available in a rainbow of colors. Beyond that, there are soups, burritos, Mexican rice, grilled fruit, fajitas, fried calamari, avocado fries and regular fries, quesadillas, bowls, nachos, tres leches cake, and dessert tacos.

Ownership plans to whittle down the menu items as soon as they see what's moving.
And?

I’m pleased to report the Mexican tacos are generally solid, and priced on par with the neighborhood at $3.75 to $6. Naturally, there’s birria. The corn tortilla has been dipped, the consomme deeply flavored, and the meat copious, though not as tender as it might be. Even with this slight defect, it’s the best birria taco in the East Village.

However, the al pastor was better in the Mexican category, with a painstaking micro dice of fresh pineapple on top. The chorizo was actually made with intact sausage rather than the usual ground sausage, and it flung off a bit of heat; while the adobo chicken, coated with a lackadaisical red sauce, was a bit dry; it was the only one we wouldn’t gladly order again.

Tried going around 8pm Friday night... they were just closing. Apparently they were busier than expected and had pretty much run out of main taco ingredients.

I went on Wednesday. The queso birria is excellent, and the fried fish taco. The carne asada was ehh. I miss Otto’s so much, but this will do nicely as a replacement. And yes...there are way too many options to process on the menu.

Went the other day, and I was pretty impressed. Solid customer service, the lady at the front was very sweet. There were way too many options, my suggestion would be to keep the local Mexican and Latin inspired tacos, and maybe keep the international and odd ones as a rotational or weekly special. Took me literally 5 minutes to decide on what to order, then you have to choose among 7-8 different salsas. It can be overwhelming and will slow down the lines.

2nd Ave gets a lot of foot traffic, so this place should do well if they keep it simple. Hope they stick around because they've got promise.