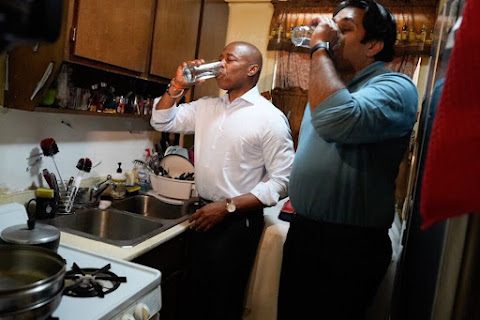 Image via @nycgov
The city announced yesterday that residents of the Jacob Riis Houses on Avenue D can safely use the water at the complex between Sixth Street and 13th Street.
In making the announcement, Mayor Adams and Health Commissioner Ashwin Vasan stopped by a Riis House residence to drink from a kitchen sink.
Before chugging a glass, Adams declared: "Nothing's better than New York City water."

This morning, @nycHealthy reviewed the final test results for contaminants and we can confidently say the water at @NYCHA Jacob Riis Houses meets EPA standards. I wouldn’t ask residents to do anything I wouldn’t do, which is why I stopped by Riis Houses to drink the water myself. pic.twitter.com/0eTnIBDyaZ

This comes after the news Friday in which Environmental Monitoring and Technologies Inc. admitted that its earlier findings of arsenic in the water were incorrect.
The water saga started on Sept. 2 when the NYCHA said it found traces of arsenic in the tap water at the Riis Houses ... and warned residents not to drink the water or use it for cooking indefinitely. According to posted notices, the levels of arsenic are above levels considered safe by EPA standards.
Here's part of the statement released from Mayor Adams yesterday:

I know the last eight days have been unbearable for the residents of Jacob Riis Houses, but, this morning, the New York City Department of Health and Mental Hygiene reviewed the final test results for contaminants and found the water to be well within EPA drinking water quality standards. We can confidently say the water at Riis Houses is and has been free of any discernible amount of arsenic since the initial tests were initiated in August and meets EPA standards. I would not ask the residents of Riis Houses to do anything I wouldn’t do, which is why I have already stopped by Riis Houses and drank the water myself.
As we stated yesterday, NYCHA nor any other city agency will test water through Environmental Monitoring and Technologies any longer, and the city intends to pursue all available legal options on behalf of the residents of Riis Houses and will look for how we can reimburse residents for costs incurred over the last week. In regard to the Legionella bacteria reported earlier this week, we suspect these results are inaccurate.
As public health experts have noted, Legionnaires Disease cannot be contracted by drinking water. Additionally, we are actively reviewing our Legionella surveillance data, and have found no reported or confirmed cases of Legionnaires Disease at Riis Houses over the last 12 months.

After being on the ground hearing directly from residents this week and laying out questions + demands below, we heard little from the City at tonight’s mtg with Riis families.

Blaming an outside vendor for NYCHA’s mistakes is not accountability. These families deserve better. https://t.co/rcSWQMA1Wg

I cannot stand this man. Such a clown. Didn't vote for him, but here we ere. Stuck with him for four years.

So if all the tests for arsenic and Legionalla were inaccurate, how are residents to believe that the same tests that show the water is safe ARE accurate? There was probably some contamination which was quickly flushed out. Residents of Riis Houses reported cloudy water around the time of the tests, which could indicate a leak in a pipe which could have sucked in contamination from the toxic waste below the area. Also remember there is an underground stream which runs from 14th street at the river and flows underneath the buildings on 11th St and 2nd Avenue. I remember as a child getting a school tour of a basement pump in a building there and you could see the water bubbling up. In any case it was likely a temporary condition which has cleared out, but the fact that is he city can’t get its story straight reminds me of when EPA head Christie Todd Whitman told us the air was safe to breathe after 9/11.

I think “The City” and our local elected officials did a huge disservice to Riis residents by whipping up hysteria over an implausible test result (the origins of which have yet to be explained as far as I have read). Yes, tenants “have been through a lot” but they got put through it by the aforementioned. And “compensation”? For having to drink bottled water (that was delivered to you) until thorough, responsible testing could be done to settle the fake issue? There are so many real, difficult problems — including for NYCHA residents — that it makes me angry when our leaders jump on the easy publicity bandwagon instead.

This guy is all about the photo-op

Eric whispers to his assistant “this is from my Poland Springs bottle, right?”

Next to the definition of "showboater" in the dictionary you will find a picture of our dear new Mayor. Starting to make me wish DeBlahhhsio was back, and that's saying something.

Thank goodness for The City for bringing this to our attention! Shame on Carlina Rivera and Eric Adams, and the other electeds for ignoring or trying to bury this issue. They do not care about the community at all, just the photo opps and the pretend politics of advocating for the community. Don't trust these politicians.