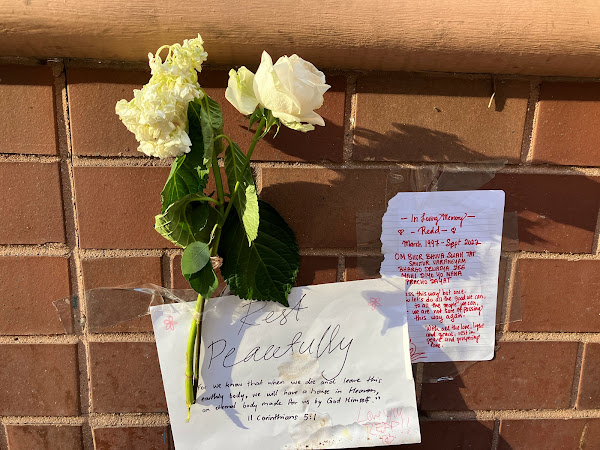 Post updated below. Photo from 9/3 at the scene of the shooting.
Police are investigating the fatal shooting of a 25-year-old woman early this morning on 14th Street at Irving Place.
According to published reports and police sources, the shooting occurred just after 5 a.m. on the NW corner of 14th Street and Irving Place — near Chipotle.
Per PIX11:

The suspected shooter, who remained at large Thursday morning, was described by police as a heavyset man who wore all black clothing and a mask. Investigators said that they were also seeking a woman, though a description of her, as well as her alleged connection to the slaying, were not immediately specified.

We will update the post when more information becomes available.
Updated 5 p.m.
NY1 reports that the victim worked at the IHOP on 14th Street.
Updated 9/2
According to the Post, the victim is Imani Armstrong, who worked beyond her usual shift at IHOP because the restaurant was busy. She was headed to the subway when a masked man approached her from behind and shot her in the back of the head.

"The individual was targeted," Chief of Department Kenneth Corey said Thursday. "We have a number of suspects that we’re looking at, but nothing we want to commit to right now. But I'm very comfortable saying it was not a random attack."

The Post reported that Armstrong, who also worked as an exotic dancer named "Red," had just been served divorce papers by her wife and moved out of the apartment they shared.

Her kids have been in foster care on Staten Island and she was attending anger management classes in hopes of getting them back, coworkers told the Post. But prior to the murder, she didn't seem "like anything was on her mind," one coworker said.

Police have made an arrest in the shooting — Clarkson Wilson, a former boyfriend, CBS 2 reports.

I wish the city would do a study of the most deadly hours of a NYC day/night. My unscientific hunch is between 4-5 AM.

So there’s the reason for the 5.30am helicopter wake-up call.

Awful. And the new gun laws make me feel even less safe.

As New York RAPIDLY DESCENDS even lower than it was during the 1970's...

For James and other decrying the collapse of NYC, yes, there clearly has been an uptick in crime - we all see that, however, the numbers of crimes are still fractional when compared to the 1970s or even the 1990s. You can see at the bottom of this document here: https://www1.nyc.gov/assets/nypd/downloads/pdf/crime_statistics/cs-en-us-city.pdf

"It's still not as bad as the 70s/90s", as if any rise in crime is ok as long as it hasn't reached old levels. What about making sure it doesn't continue to escalade? I no longer feel safe riding the subways or walking home at night compared to 5 years ago. Not to mention the huge increase in larcenies lately...

Overall crime is nowhere near the levels of 70's-early 90s, but yes it's definitely trending in the wrong direction.Due to the instantaneous reporting people like James become a bit hysterical and use terminology like "RAPIDLY DESCENDING". There was no internet to speak of 30 years ago so people didn't know about what was going until a day or two later. Plus there was no "comments" sections on "blogs". You had write a letter to editor and maybe a week later it might be published. The INTERNET I think changes people's perception and causes them to freak out about every reported crime, indiscretion, or little daily micro aggression. Also the corrupt cops were much tougher and there was no get out of jail right away and go back on the street. Not unusual for the cops to book a suspect, handcuff him, and then toss him down a flight of stairs. When people went shoplifting that meant Macy's or Gimbels. You maybe had two people a "Booster" and a "Lookout. "Crews didn't loot luxury stores in SoHo because there weren't any. Queer bashing was a thing but Elderly people and Asians weren't assault for fun. That's not how you made your bones. But for whatever reason, since Covid, things for sure have gotten quite a bit worse...........

@1:04 PM - no, no increase is ok - fully agree - there has been an overall decline as people realize there are minimal consequence for low level crimes, coupled with the lack of any appropriate care or strategy to deal with the high number of mentally ill, often homeless, people who engage in all sorts of behaviors, some crimes, that make many of us feel less safe.

BTW - another shooting this after at East 12th and Ave D - hearing it's a fatal shooting.

There was a report of a shooting at 3 Haven Plaza between Avenue C and Avenue D early this afternoon ... there isn't any confirmation on the condition of the victim. Have photos from the scene and am waiting for more details for a post.

When incidental homicides begin happening in upscale neighborhoods, it's a good indication that crime is out of control.

XTC Rapidly Descending was a poor use on my part..In-fact it's already there and can get MUCH Lower...I was here in the 1970's and walked the streets and rode the Subways then and the Parallels are unmistakable.

Not that incidental, isn't it? Targeted killings can happen in any neighborhood. The alarmism here is alarming.
And yeah, right, this is "lower than in the 70s"... Common...

XTC...I so agree with you! You make so much sense.

That’s two shootings in the area in one day. Sad and scary.

Condolences to this young woman's friends and family. Since there was apparently no attempt at robbery or assault, and the victim was reportedly targeted, there's an unfortunately nontrivial chance that this was partner/stalker violence. That exists in every neighborhood.

Does this or any other broad daylight shooting surprise anyone? DA Bragg's turnstile all but promotes this deadly behavior. Also, Defund the police is going SO well...

I was around around the 80's and you worried about being robbed. Today the level of theft from stores is beyond anything from the bad old days, and you have to deal with the seriously mentally ill on the street.

For everyone babbling about crime rates: both of these shootings were targeted assassinations. Crime rates are irrelevant.

@XTC: Sorry, but I've lived here since the early 70's and we had things like NIGHTLY NEWS on TV, and NEWS RADIO that people routinely listened to during the day, and NEWSPAPERS that would have shown the headline the next morning. Please stop trying to make the pre-internet age sound like it was the Dark Ages. We also had far more neighborhood "block watchers" or "stoop-sitters" back then, who kept an eye out and reported local goings-on to the people on the block.

And you can "credit" social media - FB, Insta, TikTok, etc. - for so many people who are now living their lives online, to the extent that at times we can see someone commit suicide in-real-time on their FB feed, etc.!!

This is why I don't find the all-encompassing internet to be an improvement, news-wise, over the 1970's. This story could have waited to be reported until there was fuller info; none of the reported facts would have changed, and in fact the reporting TODAY is far more complete than just the "it bleeds, it leads" headline on Ch. 7 yesterday.

@1133- Actually the 70s were WORSE than the Dark Ages......Lol........Perhaps your memory is a bit foggy: NYC was on the verge of bankruptcy, Son of Sam murders, Blackout and looting, EV and S Bronx resembled war zones, Heroin was the drug of choice for many, Times Sq (& PA Bus terminal) were like Dante's 7th Circle of Hell, Graffiti was everywhere (some of it quite good) and 1st cases of AIDS were recorded (bubonic plague of gays and drug addicts). For shits and giggles google Rats/ 1979/ Garbage Strike 3 weeks. A trip to Klein's on Union Sq (another hell hole) was considered luxury shopping back then. Throw in the corrupt cops and Mafia and you had quite a fetid mess of urban living.

Yup, that's they called it Fun City......never a dull moment

"Story could have waited to fuller info" So that's part of my core point, that is, that people react instantaneously before complete facts are reported and indeed *fake news* becomes quite real for many regardless of the actual facts.

"Defund the police is going SO well..."

You know they weren't actually ever defunded in any meaningful way, right?

We are nowhere near 70s level crime, XtC. I was here too.

So...is everyone who decided this shooting marked the end of civilization in the EV going to recant when it turns out to have been an unfortunately all-too-common (ex-)partner murder?