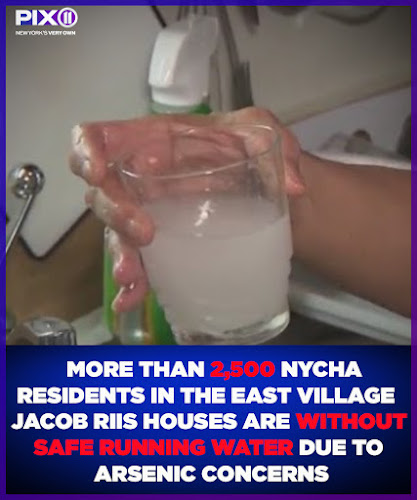 Is NYCHA water supply separated from the rest of Alphabet City or East Village? Does anyone test the water in the rest of the neighborhood?


How does the city know there is no tainted water elsewhere in the
city or at least the whole area ?


Even if it was the pipes in the NYCHA - were any other buildings in the area tested ?

This whole story doesn't make sense. Arsenic usually comes somewhere into the water supply before it enters a building. All of NYC's water comes from 1 of the 3 water tunnels which are fed from reservoirs up north - it's famously good water. Mind you, once that water enters a building anything can and does happen - lead pipes can leech, bacteria can exist in water towers (most buildings above a few stories pump water into tanks where gravity then feeds it to apartments), and so on. But where would arsenic be entering within this NYCHA property? Some have speculated it's the nearby construction, but how would that get into pipes? It's unreal how poor the city manages these complexes and how poorly they communicate.

Either arsenic is bein leached from pipes that are very specific to the Jacob Riis Houses or we’re all potentially drinking arsenic. They don’t have their own water supply.

Question: How did the arsenic get in the water specifically at NYCHA?

This is from the previous post on the water crisis... via reporting by The City:

According to an internal NYCHA email obtained by THE CITY, DOHMH [Department of Health & Mental Hygiene] doesn’t believe the contaminant emanates from the water supply but is somehow coming from the plumbing system at Riis itself.

A key concern for DOHMH is whether construction from ongoing work related to damage inflicted 10 years ago by Superstorm Sandy, as well as current work on the development’s heating system, have stirred up the soil and contributed to the contamination of the water.

@Grieve 5:39pm: Thanks for the update, but it does make one seriously question if anyone in NYC is in charge of these buildings and their construction/recovery from Sandy.

It makes me angry that people living in these buildings always get the short end of every stick; it is so perverse and so wrong.

NYCHA should be run in a sane way, but (IMO) NYCHA is the MTA of residential structures: behind schedule, over-budget, and never really does what it says it's going to do.

I and a lot of other people would love to know who really gets the $$$ that are allocated for these repairs & "improvements" that never seem to happen (or never get "finished" - I don't think NYCHA management knows what the word "finished" genuinely means).

It's fairly Orwell-ian: "All water in NYC is equal, but some water is more equal than other water."

Ok, I’ll bite. How does can anything in the soil penetrate water pipes. Ludicrous.

A Zero water filter eliminates almost all the arsenic in tap water.

Thanks, EV Grieve for the informative update. I live on 7th and C and am obviously concerned for everyone whom lives in these buildings. They are subjected to the most awful conditions without recourse or accountability for numerous grievances. Our celebrity megastar wannabe mayor needs to step up and say more about this. Adam's office and the city should be coordinating efforts to mitigate any confusion and executing a plan in place to prevent further damage and possible illness and/or deaths as a result of this.

The people who run NYCHA should be forced to LIVE in one of these buildings as their primary residence. I bet that would result in some pretty quick action on many issues.

Contaminated water can be sucked back into a leak in a water pipe. When there is a significant pressure drop in a damaged section of pipe, water surrounding the pipe can be sucked in through the hole. Let’s not forget that this area is next to the Gas house district. Coal was burned to produce the gas. One of the byproducts of coal burning is arsenic. It’s possible that arsenic deposits are being sucked into part of the water main that feeds the projects.