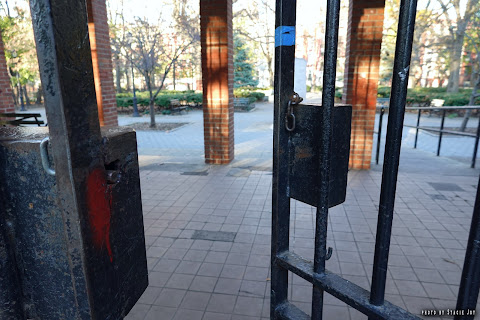 Photos and reporting by Stacie Joy
As previously reported, the area of Tompkins Square Park behind the fieldhouse/office has been locked to the public since Nov. 8. Since then, park-goers have not had access to the space that includes the Slocum Memorial Fountain as well as picnic tables, sprinklers (during the summer) and other less-traveled spaces.
There isn't any signage to explain why this part of Tompkins is no longer accessible to the public. 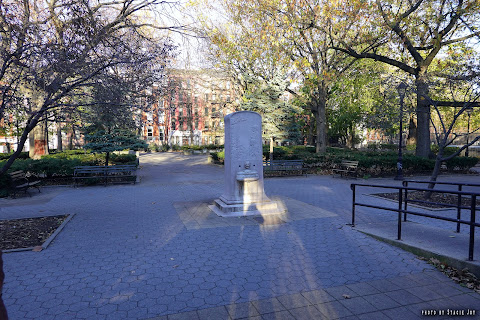 One Park worker previously said this happened after Sue Donoghue, commissioner of the New York City Department of Parks and Recreation, paid a visit and saw used needles in this area. (The Parks Department did not respond to previous requests for comment.)
This past week, Parks employees told EVG contributor Stacie Joy that there is a broken pipe in the basement of the fieldhouse, which required them to shut down this part of the Park. The restrooms are currently closed back here.
The employees provided Stacie with access to the currently locked space... 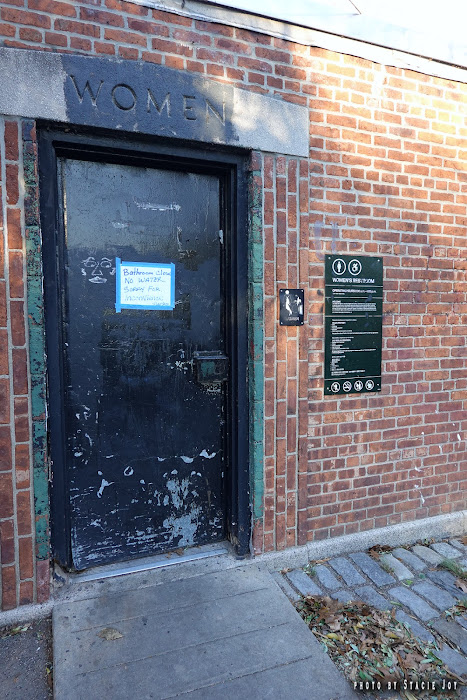 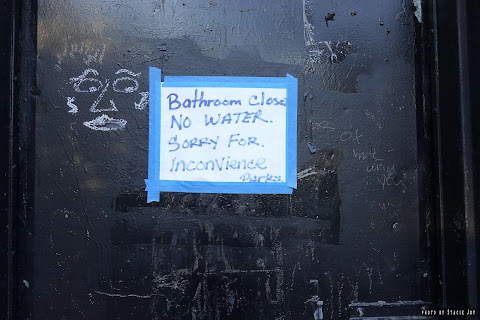 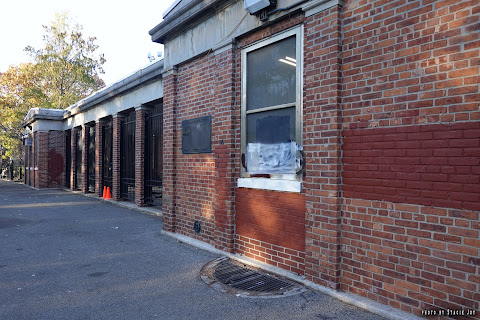 The workers said the closure had nothing to do with the uptick in drug use (and a reported OD), though they admitted the area had been used for drug activity.
Parks officials hope to have the pipe and building repaired and then will reopen the area. No set date, just "hopefully soon."
The Parks employees also said that people have been cutting through the netting and getting over the fence to access this space, which has interrupted/delayed the repair time.
The Parks Department is expected to rebuild the fieldhouse. According to the Parks Department website, the city has been awarded the contract to a contractor ... and is awaiting registration via the Comptroller's Office.
Once construction starts, work is expected to take 12-18 months, per the Parks Department.
Posted by Grieve at 5:10 AM

There's a basement for this building?!?

The bathrooms have had plumbing issues for years and it never resulted in closing this entire area of the park. I call BS on that. It sounds like they're really just prepping for the demolition, which has been planned for several years.

They closed an entire area for a single broken bathroom pipe? This is the under efficient NYC Parks I expect.

Seems important to note that the City continues to punish the public with no bathrooms, no safe housing for the houseless, lots of NYPD crackdowns and now - unsurprisingly, no bathrooms. The connection to punishing the poor is obvious.

A park worker told me the other day that that area was closed because they have been finding needles there and, according to him, because someone over-dosed there. He told me that area will be re-opened "next year."

Closing ANY sections of a city park to community use and calling for a curfew under the excuse that a few people are doing the wrong thing is UN-acceptable and will NOT be tolerated.

As for the "broken pipe" LIE, how about city councilmember carlina rivera allocating some of the $400,000 she gets as "discretionary funding" (translation: an UN-accountable slush fund she can spend on anything or give to anyone she pleases!) she gets each year to create modern vandal-proof bathrooms in Tompkins Square Park????

I bet it’s because the Parks manager is on vacation.

@2:26 - do you know who the park manager is? I've been trying to find out for months and it's not posted anywhere.

Can’t wait to see how many trees they are going to kill as part of the field house reconstruction. It seems the more trees chopped as part of any infrastructure project, the merrier to nyc parks, DDC and local politicians like Rivera.

100% agreed with all above. Let's try to be optimistic and hopefully we will have access again.
The City doesn't maintain this park and unfortunately takes the worst decisions. We lost the East River Park, Let's pray to not lose Tompkins Square Park!

Maintaining the park facilities, both for residents and the homeless, takes precedence over trees. Perhaps if the park official were catheterized and had to "hold it" until the pipe was repaired you might see a humane response to people's needs.