Photos and reporting by Stacie Joy
Baker Falls is an ambitious new project that combines an all-day cafe, bar and live music via the Knitting Factory brand at the former Pyramid Club at 101 Avenue A.
East Village resident Nick Bodor, who has owned and operated several local businesses in the past 25-plus years, is behind this new concept that's expected to open in the first quarter of 2023. (He received approval from CB3 for a new liquor license in December 2021.)
"We plan to operate a café, with coffee service during the day, happy hour, live performances, DJs — all with a rock-n-roll feel," he said during an interview with EVG contributor Stacie Joy last week.
Bodor previously sought to revive and combine several of his former concepts, including the music venue, bar and cafe Cake Shop (2005-2016 on Ludlow Street) and alt-coffee (1995-2007 on Avenue A). However, CB3 did not approve this for the former Meatball Shop space on Stanton Street in the spring of 2021.
"Once I saw Pyramid Club was closing, I thought it would be great to just buy that. I sent around a letter looking for investors to my circle of friends and contacts," said Bodor, who's an owner of the Library on Avenue A. "Historically, my projects have been underfunded, and if I'm ready to do another project I wanted a cushion, a certain amount of money. So friends were willing to invest, and then Knitting Factory CEO Morgan Margolis reached out and said he was interested."
The Pyramid closed this past October after 40-plus years in business between Sixth Street and Seventh Street. The club ushered in an era of socially-conscious drag performances featuring Lady Bunny, Lypsinka and RuPaul, among many other trailblazers. As a music venue, the Pyramid hosted Nirvana's first NYC show in 1989.
Bodor outlined his plans for the two-level space in a building that dates to the 1870s and falls within the East Village/Lower East Side Historic District... and provided Stacie with a tour of the former Pyramid before the renovations commenced.
"Upstairs, we aren't planning on making too many changes. The bar stays where it is," he said. "We want people who have been to the space in the last 40 years to recognize it. You will see the old 1987 Knitting Factory logo up in the back. Initial programming will be suggested by Knitting Factory Presents, but we also plan to have strong LGBTQ programming and emerging comics and hope to inspire young bands." 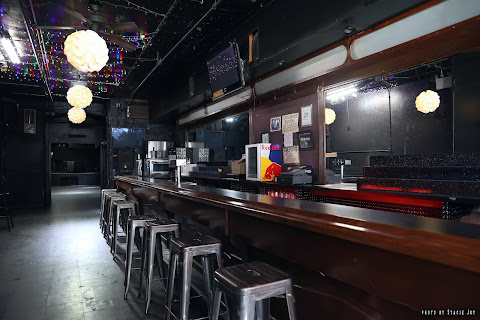 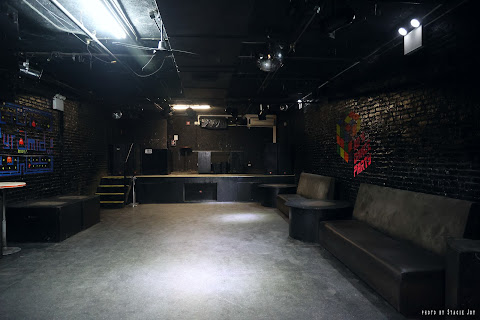 One change coming on this main level: "We are going to install a lot of soundproofing," Bodor said. "A big part of our budget will be for soundproofing."
Bodor is also planning on some all-ages Sunday matinees. And while there won't be an '80s Dance Party, a staple of the former Pyramid, he may host a Goth Night.
And on the lower level?
"Downstairs has a 68-seat capacity, and it's what I call a 'fever-dream' or manor house in terms of décor. Decrepit-looking wallpaper, vintage lamps and amps," he said. "We plan to have tables and chairs and great curated playlists." 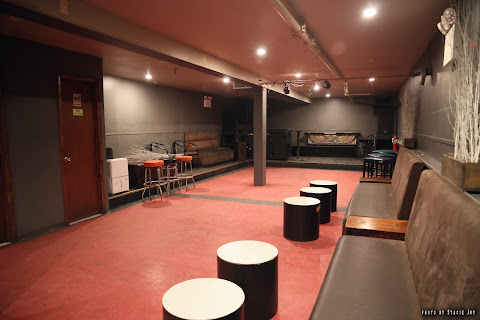 Baker Falls will have an electric kitchen for food service and a non-alcoholic drinks program.
The business will also be a family affair. Bodor's 19-year-old son Angus will have a hand in the day-to-day activities here. 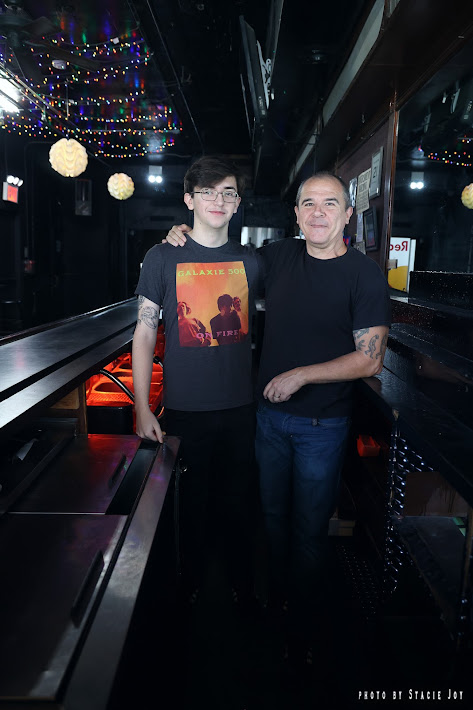 For the Knitting Factory's Margolis, the collaboration at Baker Falls is a homecoming of sorts. The first Knitting Factory opened in 1987 on Houston Street near Mulberry. In August, the Knitting Factory's only NYC outpost closed after 13 years of hosting live music and comedy on Metropolitan Avenue in Brooklyn.
"It felt like the right time to be back in Manhattan, and this location is and has always been a hotbed for artists, musicians, locals, students and community with a melting pot of so many different cultures," said Margolis, who was born and raised around the corner on Sixth Street, in an email to EVG.
"Plus, I saw some of the coolest shows at Pyramid decades ago, and I grew up in that area — a lot of memories of running the streets free as a kid. Way before cell phones and the internet. Way before it was 'cool,'" he said. "When I think about the roots of the Knitting Factory in New York, I think 'grit' and back to basics. So here we are."
For Bodor, he's excited about creating a new era with Baker Falls.
"We want to honor the history of the Pyramid Club but in a new way," he said. "This isn't just a club — it’s a communal gathering space. Food service, coffee, drinks — a community hub where you can meet and work. We want it to be multi-generational." 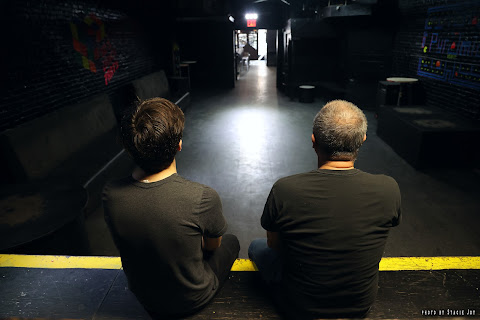 Previously on EV Grieve:
• The next iteration of the Knitting Factory coming to the East Village
• At the last night of the Pyramid Club on Avenue A
Posted by Grieve at 5:30 AM

While I mourn the Pyramid Club, I welcome this next chapter to LES nightlife. Congratulations to Nick Bodor!

Well, Angus has good taste in music based on that T, so looking forward to what's to come!

Alt-coffee was the best! A groundbreaking spot I went to regularly. Such a cool guy with innovative concepts. Yay!

Wishing nothing but success for this new chapter - rock n roll needs to live on, can't wait to see a show there - and thanks Stacie for the great interview and pics!

I honestly hope for the best but you've got to remember the original pyramid raising a fairly high water mark. You literally could see elliot sharp avant-garde one night explosive new wave funk the next , garage punk the next plus national touring acts (nirvana, chili Peppers spring to mind) but I'm afraid the open mindedness required to do that is sadly lost in 2022. Like cake shop only seemed to book acts that were all some how connected, to an outside was kinda pointless. I truly hope they avoid the frat mentality of hipster conformity

THIS IS AMAZING! GREAT NEWS FOR ALPHABET CITY!

Wonderful news! alt.coffee was such an important place for so many reasons and it is heartening when local spaces can stay local.

Fond memories of playing Pyramid in my teens and then Cake Shop in my twenties into my thirties. Looking forward to seeing what this next chapter brings.

Yes!!!! Perhaps this is a new link to history!!! Very excited about the possibilities!!!

This looks like an evolution of businesses in service industry. Pyramid Club did not survive because this city is no longer a place for people to survive but rather a place to squeeze the maximum dollar from your business.

Look at what he’s doing, responding to changes in how people view their health and lifestyles (people drink alcohol much less now) with catering people nearly all times of the day. The music aspect almost appears tacked-on if this city weren’t already in dire need of a real night life/cultural revival. Notice he’s combining concepts as well, which the modern storefront needs to do in order to survive in always-up-up-up REBNY land.

Loved alt coffee. Ahead of its time.

Impatient for the opening!!!

Way to go, Nick! Congratulations! alt.coffee was so brilliant for the way that it facilitated strangers becoming friends, so many. If there is still a way to run a cafe and live music venue in the city and make a financial go of it -- and I'm not sure if there is short of attracting people who can and will overpay tremendously for drinks all the time -- Nick will figure it out. Good luck and thank you for making the effort!

Recreating the bad old good old days is lame. Worse still it's boring. Dirty ass Rock'n'Roll bands like the The Cramps, Dead Boys, and The Heartbreakers peaked in 77-81. Different time, different vibe then. NYC and the EV has been unslummed for many decades hence it's time for a new generation of young punks, losers, and talented misfits and outsiders to breathe some new Life into the long dead corpse that was the Pyramid. Coffee sounds a bit bougie, but if helps pay the bills then why not. Personally I have no interest whatsoever in hearing classic rock, Punk, Goth, or otherwise. I hope its a showcase for primarily new shit, whatever that may entail, because that's what the real spirit of places like CBGBs, Mudd Club, and the Pyramid were all about.

If this is successful consider opening another one in the Sidewalk Cafe space!

I think Nick should put up a photograph of Nelson Sullivan on the wall somewhere. So much of the Pyramid's heyday is preserved thanks to Nelson and it was one of his favorite places so I think it'd be a nice touch.

Any hope of more live music in the 'hood makes me happy I still live here. May your new venture be successful and amazing.

This is excellent news! Great reporting as ever!

Very excited to hear! Love both Pyramid (while it was around) and Knitting Factory. Can’t wait to check new (old) place!

I'm shocked that the Pyramid Club closed for the second time and this time for good, I have a lot of good times there a 2 years before the Pandemic, Pyramid Club was like The Limelight. Save The Robots and Webster Hall in one; that place never disappointed me. I truly as the Pandemic slowly pan away the Club reopened a while back with a Dj That doesn't take any request and with that said was it's nail in the coffin. Now with a new Club taking over Pyramid Club spot I can wish for it's great success. I due hope they post their new club online not just on Instagram, so that we can read more about it. Once again good luck on your Business and may you have a successfully Business.