About the ongoing removal of the former Kindred curbside dining structure 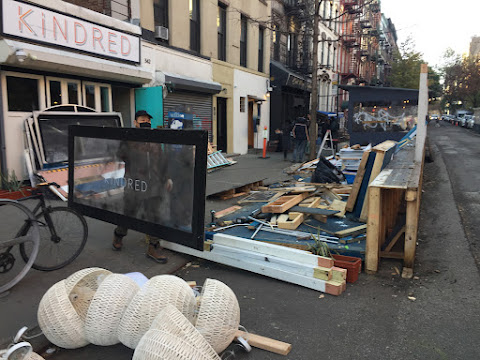 Top photo by Jefferson Siegel/2nd photo by Steven
This past Wednesday, workers continued removing the curbside dining structure from outside the former Kindred space on Sixth Street at First Avenue.
Workers took down one section starting in early November...and several weeks passed before the demolition resumed.
As previously noted, the Department of Transportation placed a termination notice here on Oct. 15... giving 24 hours' notice that the city would remove the structure, which never happened.
This is how the outdoors looked yesterday ... 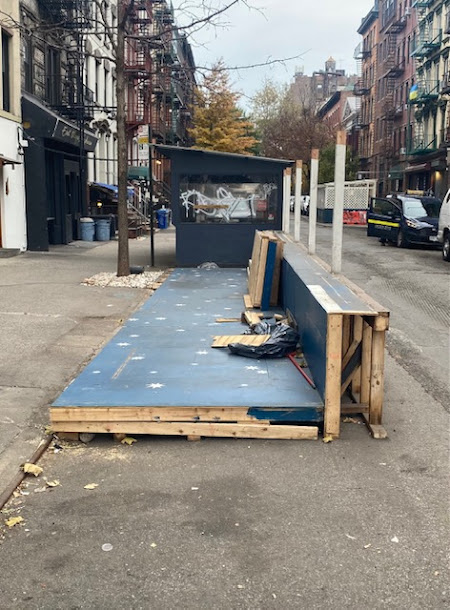 We asked Kindred partner Moshe Schulman about what is happening here.
"The city did flag us and wanted to take down all of [the curbside dining], but we were in process of securing a new tenant, so I worked with DOT to hold off on taking anything down until we had a clearer idea of what the plan was," Schulman said via email. "The new tenant only wanted one patio so we took down the second portion and left one up for them to handle."
He was unaware that the (unnamed) incoming tenant had most of the remaining structure discarded.
Schulman, who also operates Ruffian on Seventh Street, said that it was in great condition "but they must have a plan."
Kindred's outdoor structure was one of the better spaces around... and during the day, starting in September 2020, they rented tables to remote workers for $25 per person, which included coffee, WiFi and bathroom access.
"[We] spent a lot of time detailing it and building it to be a great space," he said of the efforts to offer a remote work option to residents as well as create a revenue source for Kindred during the pandemic.
Kindred closed on Aug. 14 after two-plus years in service.
Meanwhile, in an op-ed for Streetsblog last week, local City Councilmember Carlina Rivera called for a more creative and bold outdoor dining program, and for another Council hearing on the matter.
An excerpt:

In order to get our bearings in our post-pandemic "new normal," a thoughtful reset of this program is necessary, with the allocation of the appropriate resources to protect safety and enforce rules. The City Council should hold a fair hearing to give the public the opportunity to weigh in on the future of the program, in a way that maximizes its potential for businesses and protects the quality of life of residents.
The makeshift dining enclosures we see that are worn down and immovable are not reflective of the path forward. The lack of enforcement of the temporary program has led to excessive garbage and pests, narrowed sidewalks, and noise late into the night. These impacts on neighborhoods are undeniable, and can be addressed with meaningful reforms, strict enforcement, and straightforward guidelines that support small businesses without disrupting our communities.

Per Carlina Riveria's op-ed "The new outdoor dining program should have varying levels of participation, including the opportunity, where possible, for restaurants to maintain YEAR-ROUND roadside seating."

The way Proposed Int. No. 31-A is currently written "Roadway cafes shall not operate on any day from November 1 to March 31, inclusive".

She is pushing to extend the dates. Ugh no thanks!

There is enough going on in the streets, and that is public space for transportation. So many places built building additions (like Rays Pizza and Bagel on St Marks) that leave a few feet of room on busy sidewalks for pedestrians. Enough is enough! What about every other friggin industry? Get rid of this already. They have no right to do this for so long. Taking advantage.