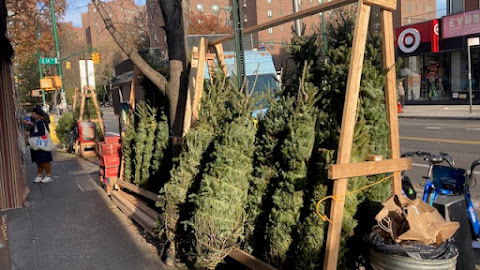 Some recent headlines (with a photo yesterday on Avenue A at 14th Street via EVG reader Doug)...
• NYCHA residents from the East Village and Lower East Side call on the mayor and NYCHA officials to improve its repair process and how it maintains the city's aging government housing (ABC 7 ... amNY)
• The state's cannabis regulatory board approved 36 of potentially 175 pot-selling licenses Monday — with at least 13 of them to be based in NYC (The City)
• To honor World AIDS Day, the Anthology Film Archives in Second Avenue and Second Street will present two programs as part of Day With(out) Art (Details here)
• NYC theater on a budget with some EV options (Gothamist)
• Danny Fields is giving Iggy Pop history lessons (Page Six)
• Actress Spencer Grammer recalls trying to break up a fight in August 2020 outside Black Ant on Second Avenue (People... previously on EVG)
• Recently opened Broome Street gallery champions women artists of color (Artsy)
• Anna Sorokin self-promotion tour continues from her East Village apartment (Variety)
• NYC's best wine bars are on the LES says this article (Condé Nast Traveler) ... The Times has its own list, with some EV picks, right here.
• LES history as seen through Seward Park (The Bowery Boys)
• Christo, Amelia and raptor season (Laura Goggin Photography)
... and the editors of The Drunken Canal, conceived in the East Village, announced its final issue...

THE FINAL ISSUE IS HERE, and its none other than Lucky Number 13. In a gesture to thank you for all the love, support, submissions, hate, kisses, hugs, free drinks, we are giving our farewell issue to YOU. Starting tomorrow @ NOON, you have 48 hours to send us whatever you want❤️ pic.twitter.com/cShQtvyiSu