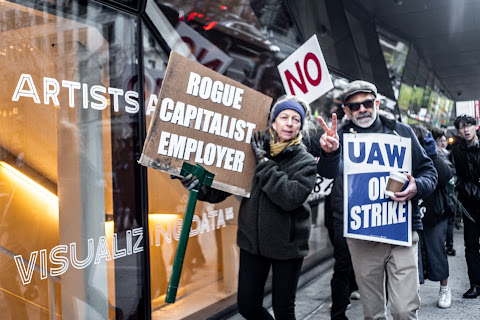 Since Nov. 16, some 2,600 part-time faculty members at the New School and the Parsons School of Design have been on strike. According to these instructors, they have not received a raise in four years — representing an effective pay cut of 18% when adjusted for inflation, as Gothamist noted. EVG contributor Daniel Efram reports on the latest developments this past week. All photos by Daniel Efram.
At a cost of more than $350 million, the New School's University Center, located at Fifth Avenue and 14th Street, was designed to meet the U.S. Green Building Council's Leadership in Energy and Environmental Design standards, making it one of the greenest academic buildings in the country.
Nothing was left to chance with the design; even the stairways inside were designed to foster community inside and outside the building encouraging "chance meetings."
Details matter. At this unique time in the school's history, it's fascinating to note that the University Center's facade is emblazoned with a course title like "Artists As Activists." Little did the school administration understand that its own public-facing ideology could be used against them as accusations of hypocrisy and lack of equity were shouted forth by dozens of faculty and students that marched side by side with the ACT-UAW Local 7902, the part-time faculty union, on opposite sides of Fifth Avenue on Monday.
The rallying team — sometimes arm-in-arm, and most of the time with a brass band performing — held signs that illustrated their frustration with the negotiations, including "Rogue Capitalist Employer," "No More Unpaid Labor, Pay The Profs," and "Fuck Institutional Greed Respect Educators." 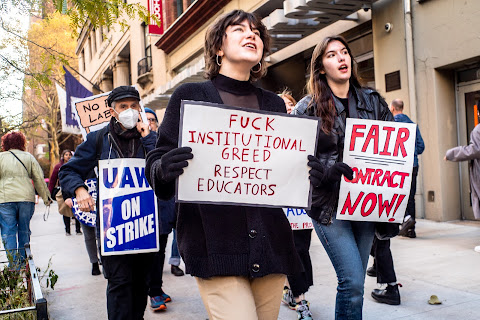 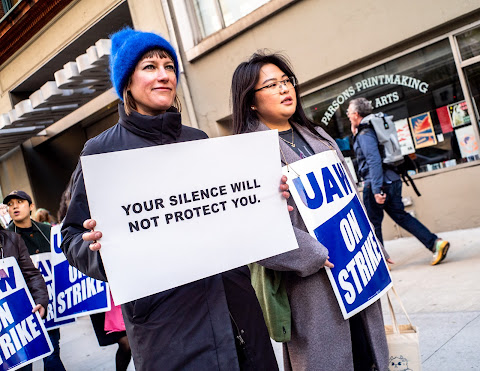 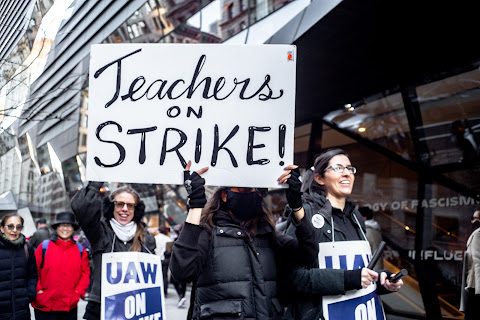 "Part-time faculty have not gotten a raise since 2018," said Rachel Aydt, a 20-year part-time New School/Parson faculty member. "And the increase being offered amounts to 1.8% per year, which does not come close to the cost of living increases in New York City during this time."
According to Annie Lee Larson, part-time faculty at the New School/Parsons, roughly 87% of the teaching faculty are part-time. They seek fair compensation, including for work performed outside the classroom, reliable health care, tangible recourse against discrimination and harassment, and job security.
Though negotiations began in June, an agreement has yet to be reached. This past week, 95% of the faculty voted against accepting the last and best New School offer.
"The University is attempting to unilaterally implement their final offer against the will of part-time faculty without having reached an agreement via mutual consent via the collective bargaining process," Lee Larson said.
She said that the New School does a great job of promoting an environment of social justice and promoting its brand of progressivism.
"They put forth this image to students when they are deciding to come to school here that everyone in this community is cared for and is treated with equity, and they are finding out in attending school here firsthand that is not the case," Lee Larson said. "This strike is bringing a lot of attention to that. The students should be made aware of these atrocious working conditions." 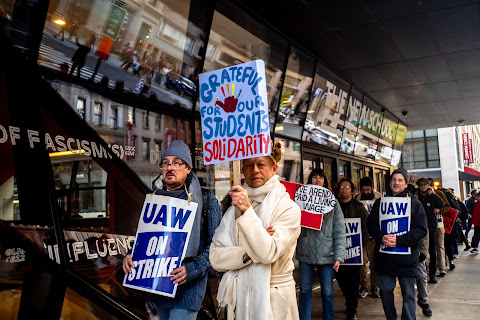 The New School/Parsons directed us to their website for their latest proposal. You can find a letter about the labor negotiations from Dr. Renée T. White, provost and executive vice president for academic affairs, at this link.
Posted by Grieve at 8:30 AM

Email ThisBlogThis!Share to TwitterShare to FacebookShare to Pinterest
Labels: The New School

We must all stand with the unions! It's the only chance we have.

"87% of the teaching faculty are part-time" - This shouldn't be legal for an institution this size.

I went to the New School for grad school. They claim to be progressive and point to their leftist roots but that is all smoke, mirrors and marketing, as illustrated by their abuse of adjuncts and how long these negotiations have gone on for. Don't forget their president, Senator John Kerry had has good friend Newt Gingrich speak at commencement despite massive student opposition in the early aughts.

Bob Kerrey, not John Kerry, resigned as president of the New School 12 years ago.

Thank you for covering this!

I am a former alumni of The New School. I graduated in the spring of 2012 with a BA in Liberal Arts. My tuition was insanely expensive for which I will probably be paying off until I die or somehow though a random miracle, some of if not all of it can be eradicated through loan forgiveness. I elected to return to college when I was thirty and accumulated 120 credits in four years while working full-time. My studies and classes were rigorous and competitive. I learned a lot. While I had a wonderful experience overall, there were flaws and brokenness in their administration within regards to faculty and certain protocols which I found baffling. Even though their endowment can't compare with the billions which NYU receives, NS does receive hundreds of millions accumulated from students such as myself and wealthy, progressive benefactors. They should pay their adjunct professors more with more promising benefits. But the sad truth is they probably won't. I developed a dear friendship with one of my former teachers after I completed my program. She instructs students at Eugune Lang and Parsons, both affiliated with NS. She hasn't received a raise in years. Her skillset and knowledge is unparalleled like so many other professors, who are at the top of their game when it pertains to their area of academic focus; most of them are only afforded adjunct contracts as opposed to full time, which is quite rare since it is a non-traditional university. I guess many things never change, especially after a pandemic, and now what looks to be a long recession. My best to the protesters.

Former EV resident and current UC Davis grad student here. Grad students across the UC system have been on strike since Nov 14th also due to unfair contracts and low wages (link here: https://www.nytimes.com/2022/11/15/us/uc-workers-strike.html). A change in higher education is brewing...