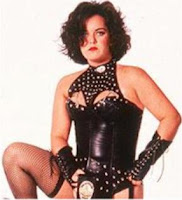 Sorry, a little off topic here, but I wanted to make mention of this....On Monday, cops raided an S&M parlor in Tribeca and arrested two people, including the club's alleged proprietor, Collin Reeve, 35, of Staten Island. They two were charged with promoting prostitution. Whatever! Let's find out more about Reeve. As the Post helpfully notes in its case to assassinate the man's character:

Marie Santiago, who used to be the superintendent of a Staten Island building where Reeve lived for several years, called him a "freak."

"When they left, we found out they were total freaks. We found videos of him and people playing with people dressed up as dinosaurs," she said.

"When they had a party, the people who came were weirdos. They wore all leather. They would wear spikes around their necks, too."