The many lives of the Roseland (For Part 2: Man, it's so loud in here)

I love the Roseland Ballroom on West 52nd Street. Not so much as a concert venue. But for its history. Since 1919, the Roseland has been an ice rink, a roller rink and a dance hall. Blogger Cosmodemonic Telegraph Company provides this summary:

The Roseland Ballroom was built in 1919 at 1658 Broadway, near 51st Street. It was the second in a string of three Roselands built by Louis Brecker (the original was in Philadelphia). Brecker envisioned a cheap but respectable dance hall: "home of refined dancing." It became one of America's most famous dance halls, in part due to its booking of upcoming jazz greats such as Fletcher Henderson and Louis Armstrong, in part due to stunts like female prizefighting bouts and law-breaking dance marathons.

After a couple of decades, it jacked up it's refinement factor in order to become "family entertainment": more decor, less taxi dancers, no jitterbugging, bouncers in tuxedos. In 1956, it moved two blocks into a former ice rink at 239 West 52d Street. The older Roseland was demolished.

(Cosmodemonic goes on to discuss how the Roseland played a key role in Henry Miller's "Tropic of Capricorn.")

As the New York Times noted in October 1996: The 1939 ''W.P.A. Guide to New York City'' described Roseland as ''the downtown headquarters for hot music and such urban dance steps as the cake and collegiate, the Lindy and the Shag.'' Tommy Dorsey, Count Basie and other big-band names played Roseland in the 1920's and 1930's.

Roseland was almost lost in the 1990s:

Roseland's dance floor is magnificent, but the rest of the interior is now well beyond shabby, with faded carpets and worn paint. The curved Iceland ceiling is painted black but marked with many holes; otherwise there is no trace of the rink. The gallery level is a warren of empty rooms, littered with debris. Graffiti and a black, spray-painted ''body piercing booth'' are leftovers from rock concerts that take over the house a few times a month -- ''Soul Coughing'' is due on Nov. 29.

Despite its age and condition, Roseland Dance City is a fascinating leftover in New York entertainment culture -- there is no hype, no flash, no marketing, no product tie-ins, just the swirl of dancers from expert to beginner. It's one of those unprocessed experiences that we say we want, but which may vanish very soon.

When a public dance hall named Roseland opened on Broadway in 1919, smart young people had recently deserted the waltz for the foxtrot, were just beginning to master the delicate nuances of the shimmy. Sam Lanin and his Ipana Troubadours were on the bandstand, thumping out such Ziegfeld Follies hits as Mandy and You Cannot Make Your Shimmy Shake on Tea. Since that distant New Year's Eve, generations of stag-line Romeos and their girls have bunny-hugged Lindy-hopped, Charlestoned, big-appled black-bottomed and jitterbugged under Roseland's star-studded ceiling. At 1 o'clock one morning last week the stars winked out for the last time; the following night Roseland reopened in glittering new quarters, billed as "a magnificent metropolis of melody and merriment."

Family Entertainment. Although professional nostalgics lamented the demolition of the old Roseland building as the end of an era, the dance hall had actually been changing its function for a long time. It started as a refuge for the "poor young clerks" Scott Fitzgerald wrote about; it evolved into a place of family entertainment.
Part 2:
Whew. Anyway! Why bring all this up? I was there last night for the My Bloody Valentine show. I won't get into all that here. But I will in the comments if anyone wants to chime in....Take it away Alex. 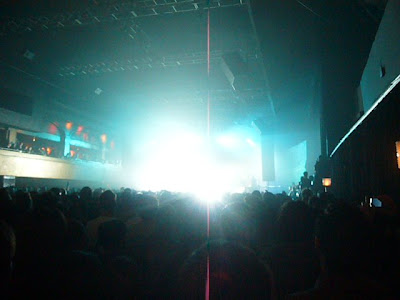