The oldest tattoo shop in Manhattan 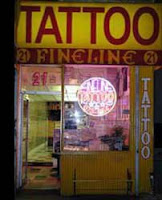 City Snapshots had a nice post this week on Mike Bakaty, proprietor of the only tattoo parlor left from the days when tattooing was illegal in New York. His shop, Fineline Tattoo, is on First Avenue between First and Second Street in the East Village.

Mike Bakaty draws tattoos with a signed picture of Gandhi hanging in a frame over his shoulder: “To Mike. Your man, Mahatma.” He traveled a lot as a young sailor, and the navy is where he got a taste for tattooing. Then, during what Bakaty refers to as the bootleg years – the period in which tattooing was illegal in New York – he started practicing the art behind closed doors on the Lower East Side.

Among the people who have received a tattoo from Bakaty: Wilford Brimley.

Via a link at City Snapshots, here's a brief look at the history of tattooing in NYC:

For 36 years, there were no tattoo shop storefronts in New York City - not even on the Bowery, where modern tattooing was invented in the 1890s. There were no televisions in street-level store windows showing people getting tattoos, no advertising - save for the tattoos themselves - fliers or vague messages in the back of the Village Voice. Every Tom had to know Dick who knew Harry who knew where to get a tattoo.

Tattooing in New York City went underground after the City Health Department found what it said were a series of blood-borne hepatitis cases coming from tattoo parlors in 1961. Tattoos were done on the second story of buildings on Canal Street, in basements, apartments and backrooms.