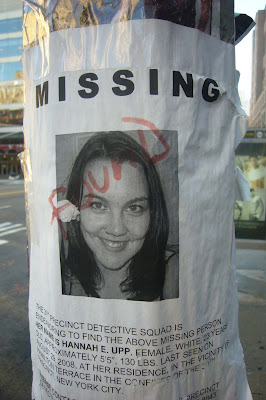 I believe they said she was off her"meds"at the time.

was this the girl seen at the apple store on 5th ave?

can you imagine the kids she taught. "see mom, i told you she wasn't right!"

Yeah, she was pulled from New York Harbor last Tuesday...haven't read any updates...

She had apparently jumped off a pier into the water. “She was almost completely incapacitated when they pulled her out,” a spokesman for the Transportation Department told the Times. "She was not responsive.” Upp has been transferred to a Richmond University Medical Center, where she has since stabilized. It's a dramatic end to a dramatic story, which began when Upp's friends reported that the Bryn Mawr graduate had disappeared, leaving her wallet and keys behind. After she was spotted several times in the midtown Apple store, officials postulated that she was depressed about her job at Thurgood Marshall Middle School in Harlem, or that she had run off with the freegans, a group of foraging vegetarians.

Always blame it on the freegans.