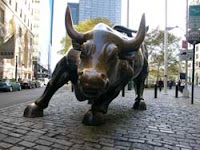 Before today's epic 777-point meltdown, Reuters had a piece on how the economic crunch may have an impact on downtown living:

Lower Manhattan's future could rest on residential development, which has seen its population double to about 57,000 since 2001, as a older, obsolete office buildings were converted into trendy apartments for Wall Street whiz kids, said Mitchell Moss, professor of Urban Policy and Planning and director of the Taub Urban Research Center at New York University.

"That's going to turn out to be one of the great ironies that the residential development is going to create the demand for office space," Moss said, "because people enjoy working near where they live."

But financial sector job losses could drive down prices for apartments 20 percent to 25 percent, more than the rest of the city, said Bill Staniford, chief executive of real estate data web site PropertyShark.com.

"The buildings that have gone after this young hot Wall Street crowd will be the most vulnerable," said Pamela Liebman, chief executive at The Corcoran Group, which specializes in luxury homes in the metropolitan area.

"Finance is one of the more dominant buyer profiles that you'll see, so obviously it's a concern," said Angela Ferrara, a vice president of sales for The Marketing Directors, sales agent for The Setai, a luxury building at 40 Broad Street.

The week after Lehman Brothers failed, brokerage Cooper & Cooper received several calls from clients who needed to break their lease or could not take a new apartment, according to the brokerage's Vice President Jed Cohen.

In pondering all these new buildings, I realized that I have never seen or heard of a city replaces tall buildings with short ones, downsizing. So we will be stuck with these monstrosities, even if they are empty and turn into the kind of place as described by JG Ballard in High Rise (horrible book; great premise).