The Times looks at Extra Place 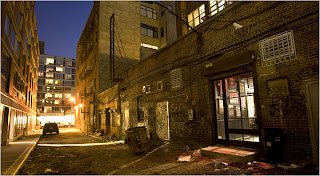 The Times looks at the possible development of Extra Place. As you know, Avalon Bay wants to pave it and add boutiques and wine bars and stuff. Others argue that it remain a public space. And kind of like it was.

“The ground was magnificent,” said Danny Fields, the manager of the Ramones, who took the photograph in November 1976. “It was filled with junk, shreds of clothes and pieces of barrels, posters, leaves, ropes.”

Previously on EV Grieve:
"All of Manhattan has lost its soul to money lords"

[Photo: Michael Falco for The New York Times]
Posted by Grieve at 7:02 AM

Email ThisBlogThis!Share to TwitterShare to FacebookShare to Pinterest
Labels: Extra Place, more room for condos, the Bowery, the Ramones