What happened when no one was looking 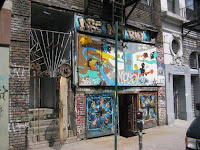 Airoots has an interesting essay on creativity and the creative process:

New York was creative when no one was looking. SoHo, The East Village, the Lower East side in Manhattan and more recently Williamsburg in Brooklyn were cultural hotbeds for as long as the city was bankrupt and they they were ignored. That’s when people like ABC No Rio and CBGB could squat buildings and Futura was spray painting subway tunnels, when artists that are now established, recognized and often no so inspired anymore where still crackheads, gays, punks, bums and squatters. There was nothing there to see. No hype and no romance. These much venerated places were at the periphery of a city on the verge of a breakdown.

Now that New York is universally recognized as a creative city all we see instead of artists are art directors, graphic designers, ad producers and so on. Established and wannabe communication professionals, commercial artists and other marketers come enmasse to such cities, where they know there is an industry that can use their know-how. Rather than breaking new grounds this so-called “creative class” recycles tired clichés and remixed proven formulas. New York is good at attracting people from elsewhere, but doesn’t breed much local talent anymore. Of course just like everywhere pockets of innovation remain. New York is big enough and its periphery is full of creative tension and driven people. But as a rule, creative work seems to happen where no one is looking.

Thanks for posting this. Great article, and sadly, so true.

Thanks Stuytown...I always appreciate your comments.

this is just so much design school bullshit nonsense missing the point completely .

Sorry but those squatters and artists of the past were not from New York either. Offhand the ones I can think of were from Canada, Wisconsin, New Jersey, Long Island, California, Germany to name but a few that stick in my mind. Even back then people came to New York to find their fame and fortune, just in a different way.

Maybe New York always attracted creative people, but now it only attracts people who do commercial work. Starving artists go to Philly or abroad. By the way what's Bob's point?