Farewell to the Emerald Inn 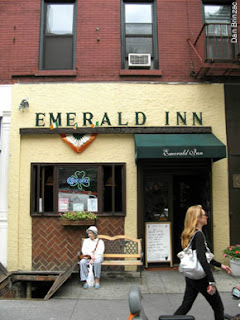 And get this: Owner Charlie Campbell, whose grandfather opening the place when FDR was in office, "got the bad news when he saw the location advertised for lease on the Web site of real estate brokerage CB Richard Ellis."

The cozy inn, with a few booths and faded pictures on the walls, was once well known as a "beer and a shot" joint.

In the mid-1980s, Columbus Avenue was a rough stretch of blue-collar taverns, bodegas and hardware stores, with few of today's high-end boutiques and beaneries.

Among them yesterday was Michael Morfit, 46, a partner in Lighthouse Financial, who said he comes in twice a week.

"We used to have all these ma-and-pa shops," Morfit lamented over a couple of Buds. "Now all you have is big companies like Circuit City and Best Buy, because smaller companies can't afford the rents."

Well, I'll spare you from yammering away about how much I like the Emerald Inn. It's expected to close in May. Go and enjoy while you can... and stop by the P&G while you're at it.
Posted by Grieve at 7:03 AM