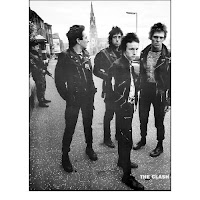 The Daily News had this brief today (and I see Brooklyn Vegan had the item yesterday...). Anyway, here's part of a press release on the opening of the the Rock and Roll Hall of Fame ANNEX NYC in Soho next month:

This November, the Rock and Roll Hall of Fame ANNEX NYC will open its doors for the first time. The highly anticipated ANNEX will take visitors beyond the typical museum experience in a dynamic and immersive journey that recalls some of the most defining moments in rock and roll history. When the ANNEX opens on November 24th, visitors will journey through multiple galleries to discover the moments ignited by hundreds of music revolutionaries like John Lennon, Madonna, Jimi Hendrix and Bob Dylan. Additionally, The ANNEX will open its first special exhibit in true punk rock style, honoring the Clash. The Clash exhibit, which debuted at the Rock and Roll Hall of Fame and Museum in Cleveland, OH in 2006 will now appear at the ANNEX for a limited run.
As the first of its rotating featured exhibits, The ANNEX will open its doors with an exhibit dedicated to the Clash, entitled Revolution Rock: The Story of the Clash. This exhibit will allow visitors to get an in-depth look into how the band’s politicized lyrics, musical experimentation, and rebellious attitude have helped shape rock history. As rebels with a cause, The Clash took the manic anger of British punk and transformed it into a political and aesthetic agenda. Album after album, as they railed against the status quo of corporate rock and safe middle-class values, The Clash was a burning reminder of why punk mattered.
The exhibit will examine the music and lives of the band with artifacts including well-known instruments, stage clothing, rare posters, set-lists and original manuscripts. Highlights include Joe Strummer’s Fender Telecaster and Mick Jones’ Gibson Les Paul Jr. guitars and handwritten lyrics for “London Calling,” “Know Your Rights” and “Clampdown.”
The Rock and Roll Hall of Fame ANNEX NYC is proudly supported by official sponsors Citi, Best Buy, Diesel for Bloomingdale’s, and Gibson.

Email ThisBlogThis!Share to TwitterShare to FacebookShare to Pinterest
Labels: Rock and Roll Hall of Fame, SoHo, The Clash