Sources: One dead, two wounded in early-morning shooting on Avenue A 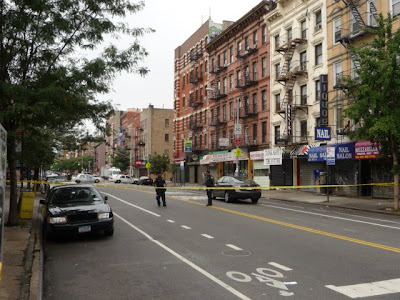 One man was killed and two others were wounded after a dispute turned deadly early this morning on the northeast corner of Avenue A and 13th Street, according to several sources on the scene. 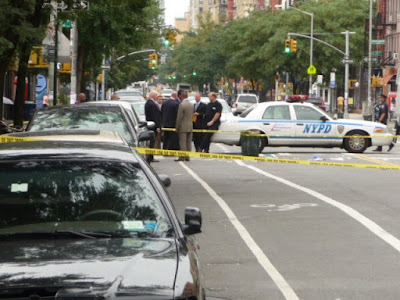 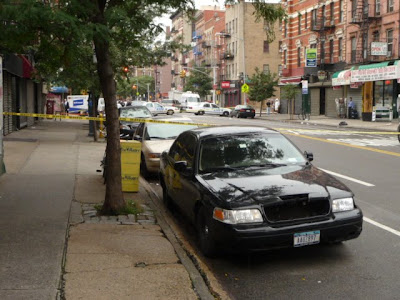 Not much is known at the moment. Police were still canvassing the area and protecting the crime scene. One nearby store owner said that it was not anything related to the Avenue A nightlife. However, another resident said that it was a doorman at one of the bars/restaurants on this stretch. (Note: While word on the scene from a credible source said there was a fatality, there has not been any official confirmation from the police.)

UPDATE: Bob Arihood was on the scene ... he has the timeframe at 4:20 a.m., with witnesses only reporting two gunshots and two wounded. His reporting supports what a resident told me: That the incident took place in front of Forbidden City; and that one of the men shot was employed there. 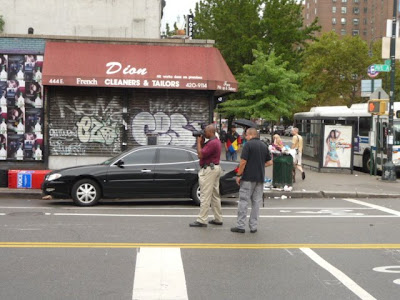 1010 WINS has the following report:

The shooting took place shortly after 5 a.m. outside a Mediterranean restaurant on Ave. A in Stuyvesant Town, police said.

All three of the unidentified men were rushed to Bellevue Hospital where one of them was pronounced dead. The other two were listed in stable condition, according to officials.

Area residents tell 1010 WINS' reporter Glenn Schuck, that they are upset the bars and clubs in the area stay open so late.

There's no word as to what may have caused the shooting. No suspects have been arrested.

A tragedy under any circumstance, but I choose to think this is a result of the negative impact of the 'bar scene' on the neighborhood. When you have an imbalance quality of life suffers and in this case tragically.

Wow I go on vacation and less than 12 hours later all hell breaks loose. I do note that this happened after the bars should have been closed.

I'll be away for most of the day. Will provide any updates tonight.

Good on the scene EV.

Hi EV. I was on my way to cat sit this morning when I came across the scene just before 9 a.m. A news photog told me that from what he was told the incident was connected to Forbidden City and that a bouncer from the bar was among those shots. According to the photog, one person died.

Greive I arrived after the event , perhaps as much as a half hour later ,but I talked to a witness who saw the event and she said that there were two bodies . She went to both bodies before any one else arrived , felt a pulse in one and no pulse in the other .
I also talked to two other witnesses that I have known for several years who had walked around the corner roughly 30 seconds aftewr the event . they saw 2 bodies and heard 2 shots .

The time stamps on my images show that I arrived on scene around 4:50 or so . The shooting did occur well before before 5AM ,roughly a half hour or so .I was given the time of 4:21 by one of the witnesses above who had called me on arriving on scene .

I first noticed the commotion ,lots of flashing lights , at 13th and A about 4:30 while standing and talking to people at Ray's candy store . I was not listening to the radio unfortunately other wise I would have had a much better collection of images that would leave no doubt as to what happened . At the time I was going home and almost did not check out what was happening at 13th and A

I just walked by Forbidden City, and some of the locals have made a little shrine with candles and flowers. Someone from Forbidden City came and opened up one of the bars gates, and residents offered their condolences. He said that the bouncer, who was shot and killed, was just doing his job, trying to break up a fight. So sad.

just wanted to add that while the bar could have been "closed" (ie: no longer serving and in the process of or having just finished kicking people out of the bar), the bar staff was probably still there doing their job. most places take about an hour to shut down after the patrons have been kicked out.

even though the lights get turned on, music gets turned off and an effort was made to get patrons outside, it doesn’t mean the patrons all go home. there’s always the jerkoff who doesn’t want to leave and puts up a fight with the staff at closing. then there is the group that doesn’t want the night to end so they stand around on the sidewalk/street and continue hanging out. efforts to make them leave the sidewalk and go home/out-to-eat are futile because all they end up doing is walking 15-feet down the sidewalk where they continue to stand around talking. then there’s the people, who’ve been civil all night, that decide 3:30-4:00am is the perfect time to start a fight - i swear its as though they are thinking “well, there’s no more drinking to be done so now I’m going to get into a fight.”

I don't know if you have seen the shrine in front of the bar, but they are asking for donations for the bouncer's family. He is a guy from the block with two teenagers he was raising on his own. So if anyone can help out, you can leave donations with the Forbidden City staff.

Thanks, anon: I have a post on the tribute here:

you can't blame an EV shooting on the bars. That neighborhood was the wild wild west when there was nothing there but shooting galleries and burnt out buidlings. People are people and when there are too many crammed in too little space, things jump off. There is too little value on spiritual development, so we're left with few skills to handle raw emotion. And then, things jump off.