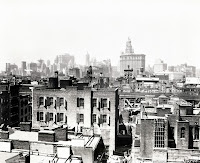 At the City Room this morning, Sarah Maslin Nir has a recap from last week's panel discussion titled "The Lower East Side Remembered and Revisited."

A few passages from the article:

The influx of luxury buildings and the moneyed residents who can afford them, panelists like Mr. Patterson seemed to say, erase the color and vibrancy of the area, even as they shoo away perceived blight like the suppliers of drug baggies. But if the roof is made of glass and steel and is designed by a celebrity architect, are the stories underneath less “real life”?

The problem, Mr. Ferrara said, is that newcomers to the Lower East Side have “amnesia of some sort — a self-entitlement. Somebody’s paying $3,500 to live in the same two or three rooms where somebody’s grandmother used to sit in the window crying, ‘How am I going to pay my rent?’ ” If they were aware of the history behind sky-high real estate, he said, the pricing out would be “a little easier to bear.”

Yet the very history being rubbed out by developers and yuppies is, paradoxically, what draws them to the area, Ms. Polland said, citing, for example, the Hotel on Rivington’s founding concept: “The area has arrived, but retains it’s colorful, urban diversity,” says literature on the hotel’s Web site. It “caters to the upper class,” she said. “It’s staking its image on the identity of a neighborhood that in order to have that diversity,” officials “would need to be thinking about affordable housing.”

Image via Museum of the City of New York
Posted by Grieve at 11:49 AM

Email ThisBlogThis!Share to TwitterShare to FacebookShare to Pinterest
Labels: Lower East Side

Bars and like-minded twits draw them to the area. They wouldn't care if the Lower East Side were built last week.

I live above some festive night establishments. I can't tell you how many times I shove my way through the crowd to get to my own door and hear drunkards squealing, "Wouldn't it be AWESOME to live here?" Well, yes, if there weren't shrieking, puking a-holes outside my door and window 365 days a year. Little do they know the party is not happening 24/7.

The funny thing is no one in my building patronizes the businesses downstairs because we know what goes on in the kitchen and out back...reality ain't so pretty.