Oh boy. I was afraid of this. The other day, I interviewed the bike that lives on Avenue C and Eighth Street, which became an iconic symbol of the great blizzard of Dec. 26-27, 2010.

I figured the Getty photo by Mario Tama would trigger some jealousy among other bikes in the neighborhood. But nothing like what you'll about to read. (I wish that they could just be happy for her.)

EV Grieve reader Lisa passes along these photos ... and a message:

We, the Buried Bikes of 11th and A, hereby challenge 8th and C to a showdown — um, throwdown — er, snowdown! Bring it on! 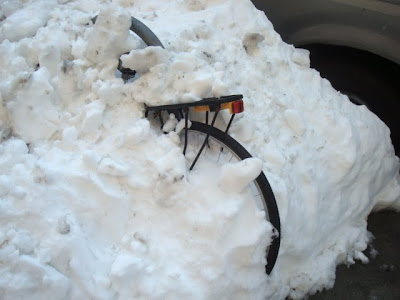 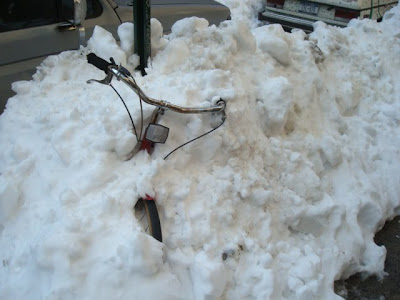 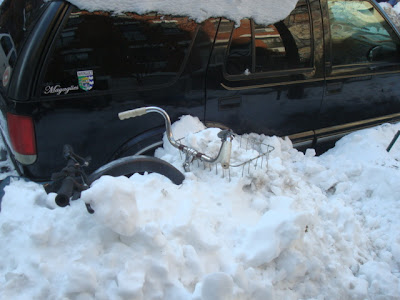 I just wish that we could all get along.

Previously on EV Grieve:
Exclusive: Q-and-A with the bike that became an iconic symbol of the 2010 Holiday Blizzard
Posted by Grieve at 11:50 AM

Yeah the LES Bikes would throw their hats in the ring if they could get outta the snow.. and if they wore hats.. :)

I just saw a plow blade crash into a bike attached to a pole on 10th Street and 2nd Avenue. I actually heard the bike scream. It was awful.

Side note: Glad to see the sanitation department out in full force today. Has anyone else seen the three-plow convoy making it's way around the East Village? It's making all the difference.

I did actually. They're really going at it. Was afraid they were going to rip off part of Third Street!

My bike would join the protest but has been too covered in snow to speak.