For some reason, I found myself near Herald Square Friday evening. Enough to make anyone want to drink. Hickey's! Of course! 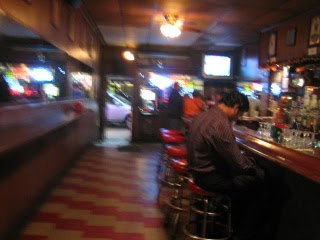 So I made my way over to 33rd Street near Seventh Avenue ... to the well-worn 40-year-old bar that I'll drink in any chance that I have... 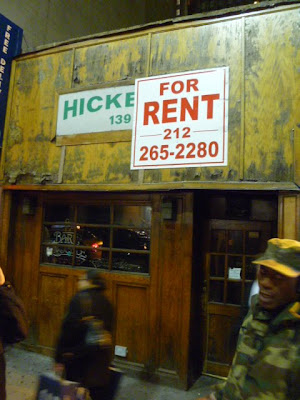 Ahhhhh!. I have no idea when this happened. Another one lost. Of course, this closure has been rumored for years.

A few doors to the east, that suburbany-looking place called Stoudt NYC was MOBBED. So I went into the OK-at-the-right-time Blarney Stone next door. This was NOT the right time: Pre-Knicks game crowd. So I found a slot near the front door. An array of half-finished drinks sat there on a table next to me. A woman wondered in. I'm pretty sure she was carrying a glass of red wine in with her. She put down her wine. She started wolfing down the different drinks. Two half-empty bottles of Magners. And something that might have been a screwdriver. She asked if that was my bottle of beer. Yes it was. She nodded, picked up her wine and walked back out the door.

I felt a little better about Hickey's for a moment.

Read more about Hickey's at Jeremiah's Vanishing New York .... At A Guy Walks into 365 Bars, our friend Marty Wombacher wrote: "Hickey's is one of the last great dive bars in Manhattan. Stop by for a drink or four and let's keep this joint in existence!" You can read his recap here.

[Top photo via Jeremiah's Vanishing New York]
Posted by Grieve at 6:56 AM

Email ThisBlogThis!Share to TwitterShare to FacebookShare to Pinterest
Labels: great bars that are now closed, Hickey's

Very, very recent, because I had a beer and a shot in there about eight to ten days ago. Always packed when MSG emptied. Sad news.

Oh no! The Stoned Crow is closing too. This is getting to be like a Twilight Zone where eventually the only place to drink in Manhattan will be a T.G.I. Fridays.

what's with all the dives closing this month. twilight zone, indeed.

This was a great place and we're now losing another---

We're losing so many great dumps and the fact that nobody seems to care is really pathetic. Soon, everyplace will have a ironically-mustachioed barkeep serving the same cucumber and secret special bitters cocktail to annoying yuppies...either that or it'll be an Applebee's.

This is crushing news. I heard it was slated to close in Feb and was planning a final pilgrimage there. First, the wonderful Blarney Stone on 32nd st and now this. Jim Morrison said it best, "Your barroom days are over."

Iam an Irish Yankee fan and a few years ago on a pilgrimage to the stadium I had the luck of stumbling into hickeys,the beer was crap but as a new York fan it felt like a new York bar,sittin at the bar drinking a beer talking crap to strangers without any pretentiousness just felt right,I was immediately comfortable,isn't that Wat a bar is supposed to be.really sad that I won't be able get another beer at hickeys,but at least I have the memories.Manhattan just became a little less appealing to an Irish Yankee fan,Michael, Belfast.