La Bonne Bouffe bows out of Avenue B

La Bonne Bouffe, a cafe-bakery-small-plates-type place, opened on the corner of Avenue B and Second Street in March 2009... The hours have seemingly been erratic of late... and the gate was down all weekend... 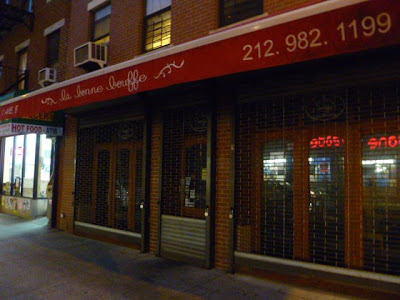 Sadly, it appears the eatery has closed. Yesterday morning, a reader noted that five-day demand for payment notice appeared on the front gate... The space is also on the market — $4,400 per monthly...

Anyway, always seemed like a tough sell — La Bonne was the third cafe-bakery-small-plates place to open since January 2009 on Avenue B between Second Street and Seventh Street... The Wall Street Journal also mentioned the eatery during its New Crowd Descends on East Third Street piece on Dec. 3...
Posted by Grieve at 6:57 AM

Email ThisBlogThis!Share to TwitterShare to FacebookShare to Pinterest
Labels: Avenue B, La Bonne Bouffe, restaurants that are now closed

the situation with commercial landlords here is so outrageous that pretty sure not even the bars and chains will be able to afford the rent!!!! just nuts!

As long as the pretzle shop, zeitzeff, Cortadito, and Snack Dragon persist, Ill be as sound as the pound.

I never saw anyone in this place... Ill often blame the landlord, but I dont think these guys were really putting any effort into making this a spot to which anyone would want to go.

food was no good. no compelling reason to go. that is what happens. no one else's fault but their own.

I wanted to like this place. The owner seemed so proud of his new space... and I hated the coffee... and the desserty thing I bought was... stale.

@EV - I agree! I had the same experience. It seemed cute and earnest... somebody's dream. But I at there a few times and the food just didn't work for me. I always feel bad for them tho.