Shake Shack poll results: The end is near! (Woo!)

Yesterday we asked: What if a Shake Shack opened in Tompkins Square Park? 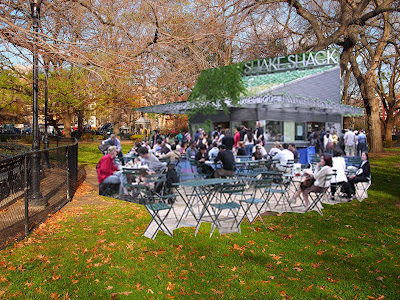 We based the survey on one sentence regarding Tompkins Square Park in the Times from Sunday that read ... "The echoes of demonstrators yelling “Die, Yuppie Scum” may be very faint these days, but there is no Shake Shack ... yet." 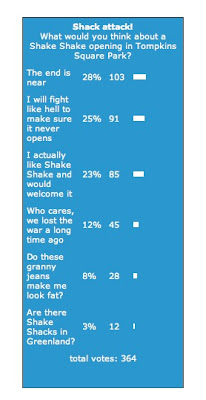 We're calling it official, though because this is America, final results of the election won't likely be known for another 2-3 months. So keep voting!
Posted by Grieve at 7:00 AM

i demand a recount! there's only a 3% discrepancy between the first and second place vote getter. i'll take this to the supreme court if i have to .

You'll have to take it up with the publisher, Esquared... oh, wait....