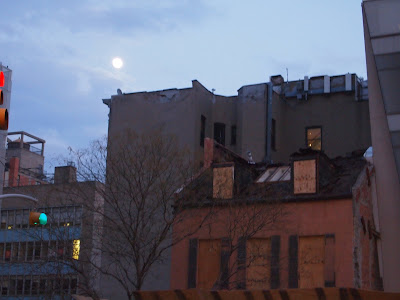 Today, developer Arun Bhatia will meet with concerned members of the community about the fate of 35 Cooper Square. Per the developer's wishes, the meeting is not open to the public... and no press. Sources said the meeting will last an hour. Speakers will include Kent Barwick, president emeritus of the Municipal Arts Society, Kerri Culhane, architectural historian, Andrew Berman, executive director of the Greenwich Village Society for Historic Preservation, Simeon Bankoff, the executive director of the Historic Districts Council, and Victor Papa, president of the Two Bridges Neighborhood Council, among others including some local politicians. David Mulkins, chair of the Bowery Alliance of Neighbors (BAN), will also be there. BAN was instrumental in getting this sit-down in the first place.

Perhaps after today, we will have a better idea of the following:

• What the plans are for this space.
• If the plans may include a portion of the original 35 Cooper Square structure
• What the developer thinks of the community support for preserving the building.

It's likely that the developer will just be there to listen, but we can hope for more...

Cooper 35 Asian Pub part of development deal on Cooper Square
Posted by Grieve at 6:50 AM