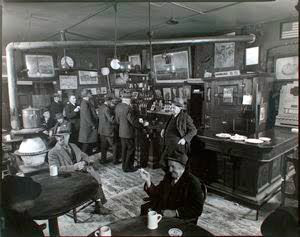 The dust busters at the DOH told McSorley's that management had to clean up the bar's famous wishbones, placed there by doughboys headed off to war... 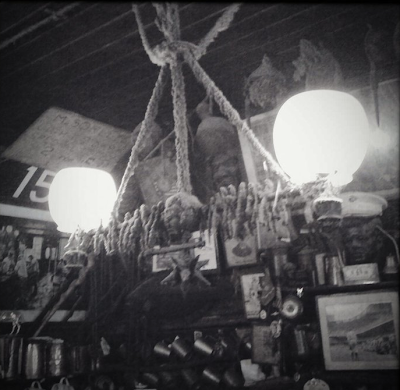 Per Dan Barry's article at the Times:

So, with heavy heart, the proprietor, Matthew Maher, 70, climbed up a small ladder. With curatorial care, he took down the two-dozen dust-cocooned wishbones dangling on an old gas lamp above the storied bar counter. He removed the clouds of gray from each bone. Then he placed every one of the bones, save for those that crumbled at his touch, back onto the gas lamp — where, in the context of this dark and wonderful establishment, they are not merely the scrap remains of poultry, but holy relics.

[T]imes have changed: old New York and new New York remain in conflict, and old New York is losing. For example, lounging cats had been a furry part of the McSorley fabric since Lincoln. But word recently came down from City Hall: no cats. A longtime regular, Minnie, has been barred as a result. 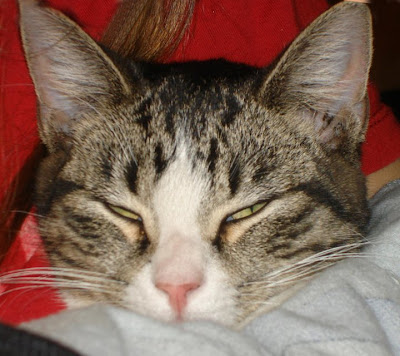 We reached out to Minnie via Facebook. She told us the following.

"I actually contacted Mr. Barry hoping he'd do a follow-up to his previous column on the wishbones. He asked about my current status, and I explained that Mr. Maher has said I'm not allowed into the bar during drinking hours...officially. Since the only heat I want coming down is from the stove, that's the fact as it must be reported and as we must maintain.

It's a sad turn of events about the bones."

OK, I've put up with a lot of bullshit in this city for the last 10 years, but when Bloomberg comes after the cats, it means WAR.

NOBODY MESSES WITH MINNIE

is this a joke? that cat is essential to the bar.

How dare the city banish Minnie from her own bar! I'm really tired of cats being treated like second-class citizens in NYC! Minnie, you should stage a feline sit-in at City Hall.

Bar cats (and dogs for that matter) are awesome and should always be allowed.

No...Minnie...Minnie is always welcome at Ray's 24/7. I love Minnie. Didn't know much about the bones.

NYC: not cool for cats. They're working hard every day taking the fun out of Fun City.

This is an outrage!

Dirty drunken animals are a-ok, but not our beautiful and self-cleaning Minnie?!

I can't believe they made them dust those wishbones. Bad Karma coming up for the DOH. And barring Minnie is unacceptable! Next thing you know they'll make them start serving one beer at a time.

Oh my gosh, I hadn't read Minnie's Facebook message earlier. My goodness, she is so classy and well-written. I'd so love to spend a sunny Sunday embroidering a quilt or drying and pressing flower petals between the pages of scrapbooks with her.

Somehow I missed this terrible piece of news yesterday. Just awful! The City's cruel & inhuman treatment of our cat citizens needs an overhaul. I'm sure the mice and rats are thrilled

I think the city officials simply missed the fact the Minnie is a "Service" cat and as such is, in fact, allowed in the bar. I'm sure this all a simple mistake.

I guess bodega cats are the next to go. 30 years ago we would have laughed to hear that cats would be barred from a barroom.