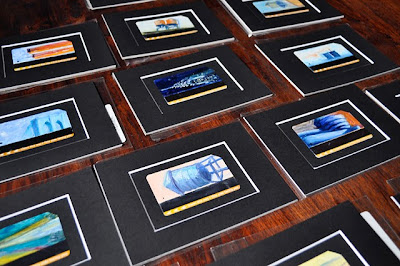 Last Friday, we discussed the story of East Village artist (and EV Grieve commenter) VH McKenzie, who received a letter from an unpaid MTA intern asking her to stop selling her oil paintings on discarded MetroCards subway cards. (She has for sale in her Etsy shop.)

The story made the rounds, from WPIX to The Wall Street Journal.

So all this has ended well. First, as she wrote, her 18 paintings sat "barely noticed and certainly unsold for three months. Until the MTA ordered me to stop 'selling them.'"

She sold them all in less than 24 hours after the attention from the intern's letter.

As she writes on her blog ... VH received a nice email from Mark Heavey, Chief of Marketing and Advertising for the MTA, asking that she:

...simply change the listing on Etsy to read something like “Original hand-painted art on a NY transit fare card,” and refrain from using an image of an original, unpainted MetroCard in the listing, you may continue to do what you are doing.”

Done, Mark. Actually, I did that last week and the Intern still indicated that I should make arrangements for a licensing agreement. ... I pointed out to Mr. Heavey that I had turned the somewhat sour lemon of his unpaid intern’s  “cease and desist” letter into a rather sweet, refreshing citrus beverage.

I wish you continued success with your “fare card art” project… the media does love a good David vs. Goliath story ... Continue to make lemonade.

Meanwhile, she is now working on more MetroCard used subway card paintings to fulfill her requests.

P.S.
Props to Esquared who helped get the story rolling at Nonetheless.

P.S.S.
Our friend Jen Doll also has an update on this at Runnin' Scared...
Posted by Grieve at 6:47 AM

It's great to hear this was resolved without a legal battle. I like this MTA guy. Hope they've learned a lesson here and won't have interns handling these matters. Interns should not be sending out letters threatening legal action! If you're going to do that, have a real employee handling such a sensitive matter.

Nice to see this, congratulations to VH McKenzie for her David-like stomping of the MTA!

i have to admit that i purchased one of these lovely mta cards in support of the artist.
we/(they?) want people to be creative and do innovative things and then we stop them when they do that.
the mta should be spending their time keeping the trains repaired, safe. clean, and on time; with safe and clean stations.