Why Counter is still open

As Eater reported on Nov. 16, wd~50 pastry chef Alex Stupak received the OK from the CB3/SLA for Empellon, "a fine-dining Mexican restaurant," at 105 First Ave., home now to Counter.

At the time, Counter owner Deborah Gavito said they'd be closing in February. She told Gothamist: "they were not priced out of the East Village, but rather she 'decided to simplify' her life and 'the day to day grind of running a restaurant became less and less appealing.'"

However, EV Grieve contributor Samo spotted this sign... in which executive chef Elena Balletta explains why Counter will be open for "another few months." 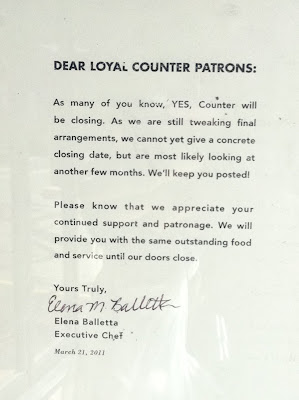 I wonder if Alex Stupak will serve Angry Lesbians for only 13 bucks?

You're awesome for looking into this. Thanks!

never understood the appeal of counter. the food was edible but not fantastic. maybe it is for vegans?