[EVG Flashback] The Lower East Side: There goes the neighborhood

The building was eventually sold in 1975 for $62,500. (Last I saw, two-bedroom units there -- roughly 1,100 square feet -- average $1.6 million or so. Of course, they're rarely available.)
The article talks about the influx of chain stores, art galleries and chic cafes. "And real-estate values are exploding" as a result. Said one longtime resident on the changes: "I've lived in my rent-controlled apartment for years and pay $115 a month. I live on the Lower East Side. The young kids who just moved in upstairs and pay $700 a month for the same space -- they live in the East Village." 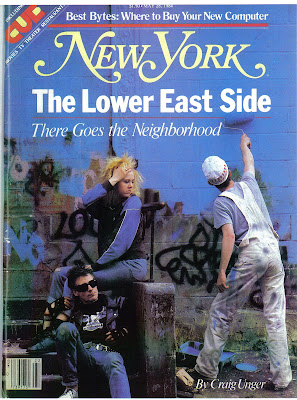 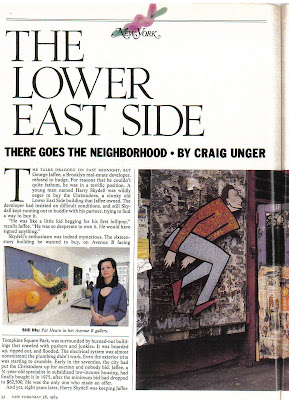 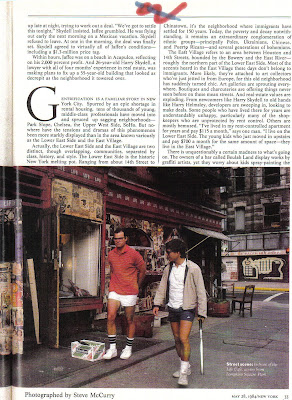 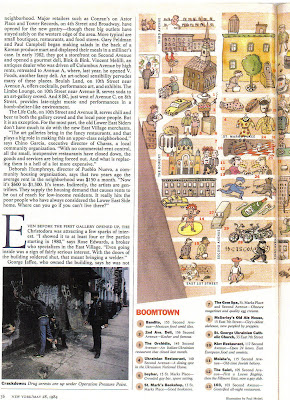 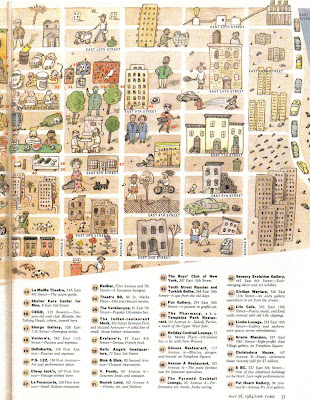 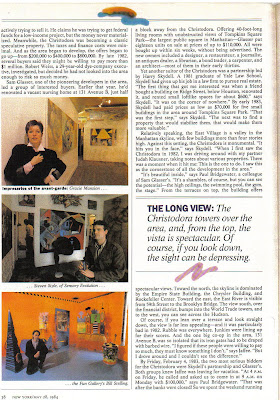 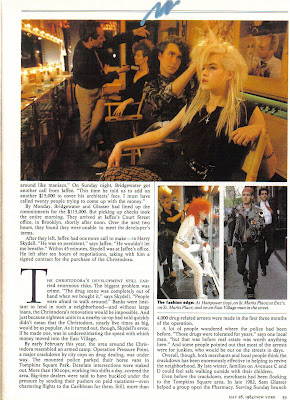 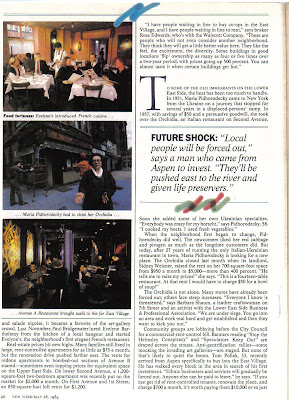 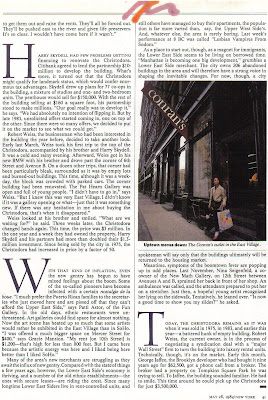 Quite a read, thanks for posting that!

Amazing to see a picture of the unique and very talented Carlo Manfredi who owned Hairpower. He cut hair through every generation and style (even creating popular styles) from the 60s through 2004, when he passed away at age 64. I was lucky to be a customer from the early 80s - A typical haircut could take well over an hour, as he'd stop to tell you stories, tend to other unrelated tasks, or even make phone calls. Quite an experience - and the absolute best haircuts I ever had.

Great piece. We're all harping about how things are changing in the EV, but this drives home the point that it's always changing. I was one of those kids one of the guys complained about paying $700 for an East Village apartment back in the day. Man, I wish my rent was still that cheap!

Dang. May 1984. I was still three years and some months shy of coming to NYC from Dee-twah to go to SVA in order to do something with my art ability as a fresh-faced youngin'. When I got here, the only times I went into the LES was to go to The World after trucking it on the subway from the west side on 34th St. And I thought I was going into no-man's land and having adventures into another zone whenever I did that.

It keeps tripping me out that I walk past areas and places that don't exist anymore that I used to think would always be here. And yet, I never thought I'd be reading those downloadable .jpgs on an iPod Touch while chilling out at an LES bar that didn't exist then, either.

Sometimes I wish I could make a time machine that would let me go back to those mid-to-late 80s days of NYC and try to intercept the future encroaching yuppie/hipsterism by any means necessary, just to go forward again and see what's going on in the alternate timeline 2011 I created.

Aw, who am I kidding? Remembering how broke-assed I was as a student back then, I would've been rocking the stock markets, buying up future select real estate while it was still rock bottom and patenting significant domain names for the upcoming internet revolution! Meet your new time-travelling overlord!

I had Craig Unger over my place on Avenue A in 2004, 20 years after this piece was written.

Dang, wish I had known so we could have chatted about it. He never brought it up!

I remember Hairpower! I used to get my hair cut there. Now I just shave it with an Atra.

Carlo used to cut and dye my hair white blonde. He was a character. Always told me the same stories about Madonna every time I went in. Wondered what happened to him...Didn't realize he passed away.

Glasser was just convicted of bank fraud in St. Louis.

Skydell resigned from the bar for disciplinary reasons.

How about this headline now: "The Lower East Side: There Went The Neighborhood."

I arrived here in 1980, just as the boomer wave was cresting and remember a lot of these places, esp the Pyramid (still here amazingly), Kiev, Leshko's, the 3 bean chili at 103, the horrible bright lighting at the Red Bar, and all the D that killed Bruce Lee sold on Ave B (the EV was SO druggy back then), Club 57, the St Marks Cinema...oddly, no great thrift stores here. There was a great C&W bar on First Ave we really liked that devolved into Downtown Beirut to appeal to the later NY hardcore types. Liked the Park Inn and the little after hours place around the corner from it with the pool table and Asteroids machine. I didn't and still don't smoke pot, but you could get nickel bags of it from the bartenders there. There was also this place my friends went to on 10th St (I think between 1st and 2nd Aves) that they called the Red Door because there was no name outside, just a bright red door. I went once, it was weird. Just a totally empty store front with one window/sliding wood door against the far wall that you slid money into to get little bags of pot slid back out by some anonymous person on the other side. Didn't like Foccaceria so much but loved Brunetta's when the husband and wife team ran it -- it was only open for lunch with a different menu for each day of the week. Fun Gallery and Gracie Mansion and the whole EV gallery scene came and went in a flash...but Beulah Land hung around like a bad cold, God I hated that twee fucking "lounge."

My best haircuts were from Carlo, I found him in the early 80's. In the 90's he Told me he wasn't cutting hair any more, only for old customers (due to some incident), that he retired. Lucky I was an old customer! When I went to him we'd sit in his garden, he'd offer me food he prepared, he even sent me home with food he made, chatted with me, giving advice;) and cut my hair. I miss him! He was an amazing hairstylist, he knew how to make anybody look great. He was a legend.

I worked at Hairpower with Carlo and Jeep (industrial Hair) in the early 80's. They taught me how to cut hair. They used me as a model for their ads. Richard Zimmerman

In 1974, I went downtown to Hair Power and Carlo cut my long hippy blond into a Ziggy Stardust inspired cut with a spiked tail down my back.. it was the best haircut I ever had...I'll never forget Carlo or the Hair Power experience

I used to date Danny Aronson who worked with Carlo at Hair Power. That was back around 1970. Danny did the most amazing haircut on me. It was so avant garde that Claudette Colbert stopped me on 57th and asked if she could touch my head. I said "Can you touch my hair"? Wow...I'll never forget that. Does anyone remember Danny? About a year ago, I met a gal walking on my street in L.A. It turned out...after discussing that we were both NYers...I mentioned Hair Power.
She screamed..."I used to work there with Carlo." Isn't that crazy??? Her name is Susan Nicholls.

I worked at hair power on st marks in the 80s

Carlo Manfredi was one-of-a-kind! He cut my hair and even photographed me. He had a picture of me hanging in his storefront. Those were wild and crazy times. He taught me how to make "gravy" (Italian tomato sauce) from scratch like a real Italian, He said. He was a masterpiece.