Last Wednesday morning, I posted a photo that Bob Arihood took outside the VIP opening-night party at the BMW Guggenheim Lab. The photo showed a drunken man slumped on the sidewalk.

There are some stories making the rounds now telling how partygoers were concerned, and eventually helped get the man medical attention. The story made it into a blog post by Linda Tischler at Fast Company. Here's a passage:

But for the fact that the poor guy barely seemed to be breathing, it might have been a clever bit of street theater to illustrate the Lab’s provocative theme: comfort — and discomfort — in the city. There was the line, with party-goers queuing up to get green wristbands qualifying them to choose between the Soave and bubbly rose, while next to them, a local resident lay sprawled on the pavement.

The tableau could also have been a question in the project’s signature game, Urbanology, which asks players to confront uncomfortable questions. In this case, “Should you leave a party, where you’re talking to somebody who could be important to your career, to help an inebriated man collapsed in the street?”

To their credit, a number of attendees were clearly agitated by the scene, passing bottled water through the fence, and frantically dialing 911 until FDNY’s rescue team finally showed up...

I asked Bob about it. He saw things a little differently. Bob figures the guy was on the ground an hour before anyone from the party tried to do anything to help. (For his part, Bob tried to speak with the fellow, and help get him off the sidewalk — with little success.)

Bob shared photos from the night that he didn't use to help illustrate what happened... 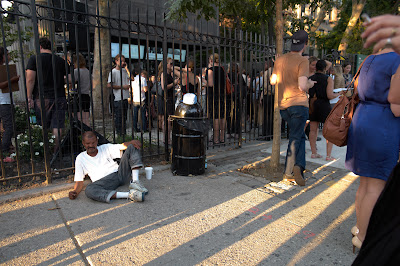 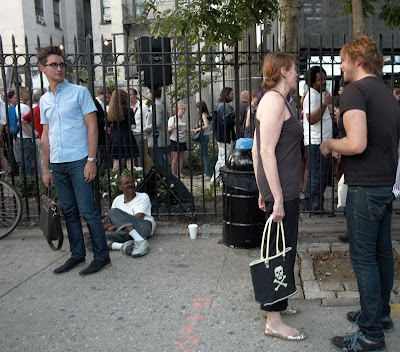 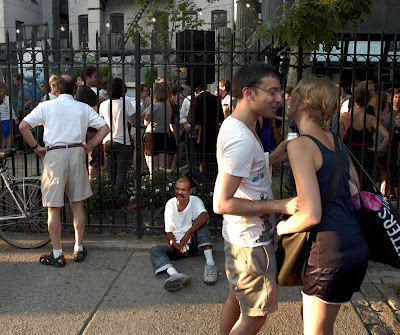 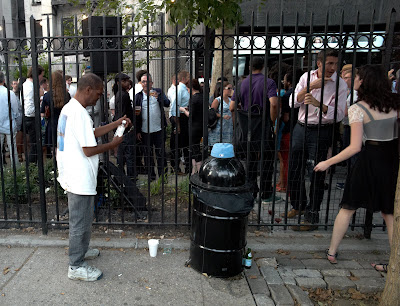 Eventually, two women from the party tried to give the man water. 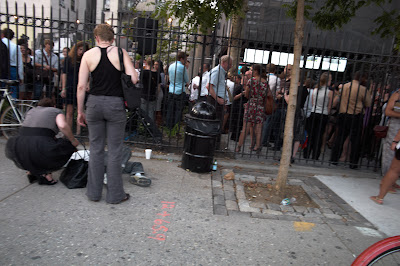 Just before 8 p.m., a Guggenheim representative, who saw Bob taking photos, came outside to speak with the man. The rep called 911. 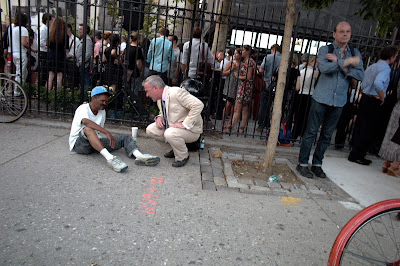 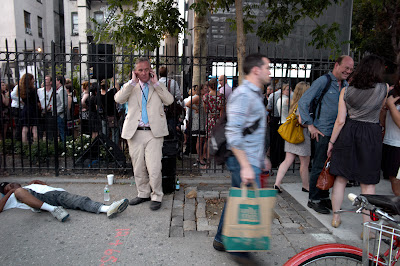 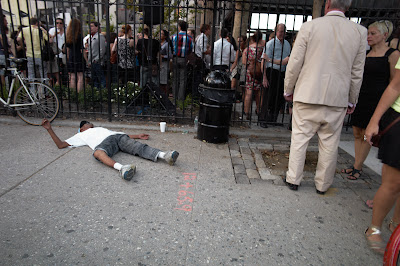 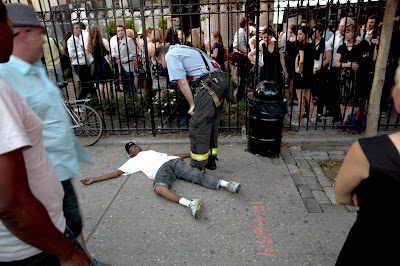 Back to Fast Company, where Tischler describes the FDNY's arrival.

"Those guys were clearly perplexed, not by the man on the ground, but why a bunch of up-towners were partying on a site that until last month was nothing but rats and rubble. As a final act, the FDNY righted the man, and he staggered off to an ambulance. Party on, dudes!"

So, what have we proved here? Nothing, really. Just felt the need to address the growing urban legend at the Urban Think Tank.
Posted by Grieve at 6:40 AM

The last time (more tha 20 years ago) I helped someone like that, he lifted my wallet.

Years ago guys like this littered the neighborhood. All you need to do is smell his breath. If it knocks you over leave him alone to sleep it off.

What a stretch this story is. The city is full of over-the limit bums on all corners. Stop blaming the LAB for it.

IS this the takeout on corner fo 2nd ave and Houston that is now selling $9 cheeseburgers. NInE DOLLARS FOR A FUCKIGN TAKEOUT cheeseburger! The east village SUCKS!!!

tischler states: "to their credit, a number of attendees were clearly agitated by the scene, passing bottled water through the fence..."
gee, i hope that they were not to exhausted from this heroic attempt to pass water through their cage, oops fence, and that a cool bubbly rose helped them get over their agitation.
"the lab’s provocative theme: comfort — and discomfort" certainly came to fruition - the discomfort of the agitation and the comfort of the rose.
it's great that the lot was fixed-up. it's too bad that the lab did not use a local food provider. i guess one of their board members needed more work.

and while there have always been folks on the street (sleeping, drunk or whatever) people rarely attempted to pass them water through their cages (oops again, fences).

The Guggenheim rep (in the penultimate photo) is wearing some saggy pants.

Man, I'm so glad I wasn't at that party.

I can't fault these people for not doing something about this guy right away. I literally walked by a guy lying flat on his back outside Tompkins just now with a bottle of booze in his hand and there were people milling all around him giving out food from the Bowery Mission and they weren't doing anything either. If you live in NYC you see bums sleeping it off on the street. If you want to drink yourself into oblivion passing out on the sidewalk is the risk you take I guess.

That's Mohamed. He is always on Ave d. He has a drinking problem. I help him when I can. So should you?

At least that trash can is sporting a rat-proof lid!

I know Mohamed. This guy wasn't Mohamed. I don't know this dude.

An ironic set of events at the BMW Guggenheim Lab opening, don't you think?