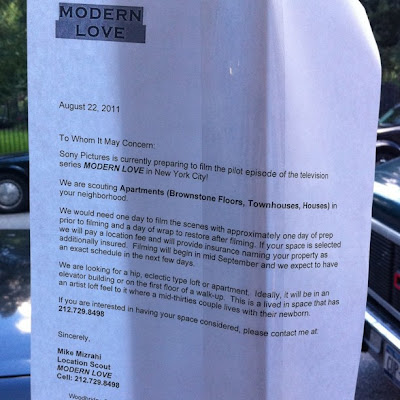 Well, you can read the flyer there yourself spotted yesterday on Seventh Street near Avenue B... for a pilot called "Modern Love."

Per Vulture, the show "centers on the science editor at the New York Times (or a modified version thereof) who suddenly becomes the 'Modern Love' editor while his marriage is dissolving and he's raising a 15-year-old daughter." Per reports, "Sex and the City alumna" Jenny Bicks created and executive produced the pilot... Just think, some day your apartment could be part of a bus tour.

Email ThisBlogThis!Share to TwitterShare to FacebookShare to Pinterest
Labels: East Village, TV pilots, TV shows that I will never watch