Sales: 'Unique and endless' possibilities for this unique church on 4th Street 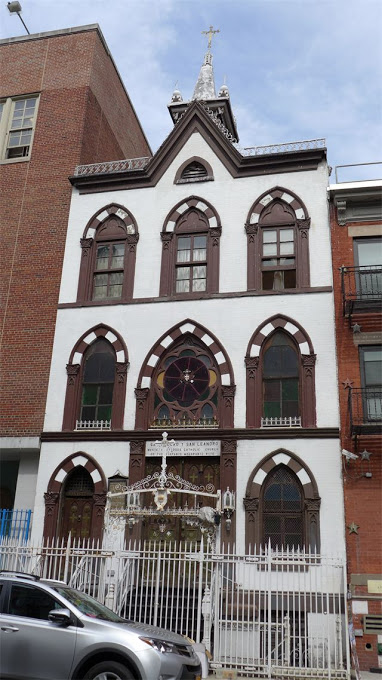 Through the years we've written about one of the most unique properties around — the San Isidoro y San Leandro Western Orthodox Church of Hispanic Mozarabic Rite at 345 E. Fourth St. between Avenue C and Avenue D.
Well, it's for sale ... again. Curbed first took notice of the new listing (and photos!).
Per the listing at Leslie J. Garfield:

The possibilities are unique and endless at 345 East 4th Street. The property is currently configured as a former religious assembly space with 30' ceilings on the main floor, a mezzanine space, and an owner's apartment above. Delivered vacant and outside a historic district, with a total of 9,232 buildable SF, this property offers the opportunity to create a large community facility or a residential single-family home. The property presents a unique opportunity for a developer or an end user.

If you don't have the $5 million asking price, then it's also for lease.
The property was originally listed in the fall of 2017 with a $6 million price tag. Per the listing at the time: "A new development (of 9,232 SF) could be residential single family/multi-family or Community Facility." There were air rights too.
According to public records, Patricio Cubillos Murillo (there are several variations of this name) is the building's owner, with a deed dating to September 1975. The document on file with the city shows that this building changed hands for $6,000 that year. His nephew is now said to be in charge of the property.
Here are two pics via the new listing... 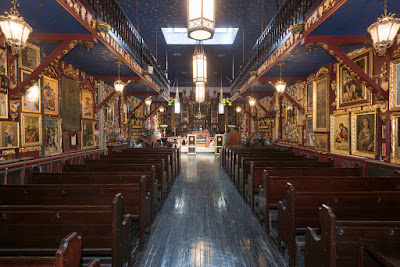 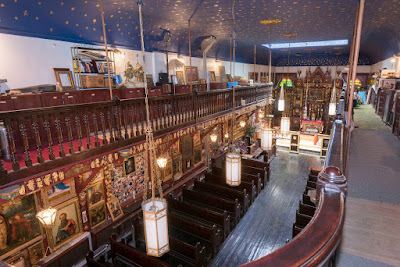 And some history via Curbed:

It was built in 1892 for the Church of St. Elizabeth of Hungary, which served the Slovak and Hungarian immigrant communities. In 1918, the building became a Russian Orthodox Church (the white-painted wrought iron entrance gate still has a crest with a double-headed eagle), and finally in 1975, a Western Orthodox Catholic Church that sought to practice Mozarabic liturgy, which was used by Christian communities living under Arab rule in early-Medieval Iberia (now Spain and Portugal). The Mozarabic Rite, also called the Hispanic Rite, is extremely uncommon outside of Spain.

The city declined to landmark the building a few years back.

There's hope that an arts organization might take it over... or the new owner could knock it down and build up using the 4,700 square feet in unused air rights.

The building to the east of the church recently sold. The former community center will be converted into residential use.
Previously on EV Grieve:• Unique 4th Street church on the market for development
Posted by Grieve at 5:10 AM

Wow, that interior is spectacular!

This building is gorgeous, inside an out. It seems like it would be a good set for films or TV. Maybe used as a live theater/performance space?

"Delivered vacant and outside a historic district" - well, that says it all. Shame on the LPC yet again.

Tragedy to destroy such beauty.

never really used as a church since '75 & not a cent paid in property taxes & now going to reap millions.

As usual the LPC does nothing to save the precious architecture, history and culture of New York City. They should change their name to the Developers and Real Estate Advocate Commission.

Looks like a fine location for the new EVGrieve World Headquarters.
Just groove on the vision of pews full of eager journalists and photographers; tipsters running in and out, reporting to EVG as he rests on The Alter Of Hope & Wonder.....
and THINK of the parties!