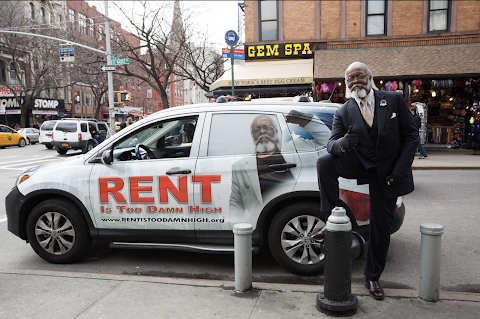 Photo from February 2013 by James Maher
Jimmy McMillan, the founder of the Rent Is Too Damn High Party, made a name for himself by running for a variety of offices, including NYC mayor and New York State governor, with his slogan: "The Rent Is Too Damn High."
We haven't heard much about McMillan, who has had a St. Mark's address for more than 40 years ... a long point of contention with the landlord who has been trying to evict him.
City Limits has an update on the 75-year-old McMillan, currently staying at the Veterans Administration nursing home in Queens. "McMillan, who served in the Vietnam War, has been staying there since February when a stroke sent him to the hospital. He blames an improper dose of medication."
And what about the eviction proceedings on St. Mark's Place?

Improbably, he is still fighting to hold onto his apartment. The owners of his building at 107 St. Marks Place first moved to eject him from the then-$872/month unit in 2011, arguing that he kept another place in Flatbush as his primary residence and allowed his son to stay in the East Village apartment. McMillan countered that the Flatbush address was the headquarters of the Rent Is Too Damn High Party, not his home, and secured a stay of eviction in 2015 that allowed him to remain in the unit.
But McMillan then fell behind on rent a year later, court records show. He told City Limits that the owner, a limited liability company connected to developer Nader Ohebshalom, would not give him a key in an effort to drive him out of the unit. The landlord’s attorneys from the firm Borah Goldstein have not responded to emails and phone calls seeking comment.
In July, McMillan made a $10,737 arrears payment to the landlord after giving them another roughly $9,000 in March and April, according to court documents. His regulated rent is now just under $900 a month—not so damn high relative to most East Village apartments—and the court appointed the Jewish Association of Services for the Aged (JASA) as McMillan’s guardian during the previous eviction case. He has challenged that guardianship and said he now appears remotely to prove his capabilities.

People can say what they want about Jimmy, but he’s not lying!! The rent IS too DAMN HIGH!!!

What a thing to happen, hope he wins !

I hope you win your case and get to stay. He clearly still wants to live there; here's to a speedy recovery. And so what if he wants his son in the apt? What about family rights?

Any landlord who tries to evict a fellow Vietnam Era Vet while that Vet is getting medical care is total SCUM !!!

Clearly, a landlord who harasses a veteran with an eviction proceedings should forfeit ownership. We need to change the laws on the books to provide justice. Jimmy McMillan is a hero. He speaks truth to power. This stretch of St, Marks shall be named in his honor: Jimmy McMillan Way.

He's handed over nearly $20,000 in back rent, and STILL the landlord is pretending he's a deadbeat tenant?

Stay strong Jimmy and fight the good fight! NYC and the East Vil have your back. One love!