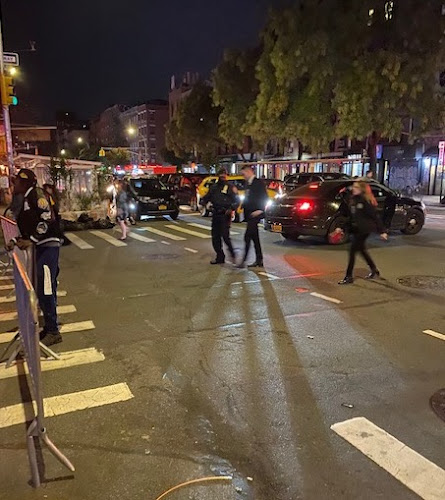 Photos by Steven
A man was shot in the stomach last night around 11 on St. Mark's Place between Avenue A and First Avenue, according to published reports and witnesses.
The Post reports that the 25-year-old victim was taken to Bellevue Hospital and is expected to survive.
An exact address wasn't listed. The Citizen app changed the address of the shooting several times, starting with 100 St. Mark's Place. Another resident said it was near 113 St. Mark's Place, where a police presence remains this morning.
Word-of-mouth from the scene was that three men approached the victim with one of them pulling the trigger. The Post reported that the NYPD recovered three shell casings.
This block of St. Mark's Place is closed to traffic on weekends for sidewalk/street dining.
No arrests have been made. 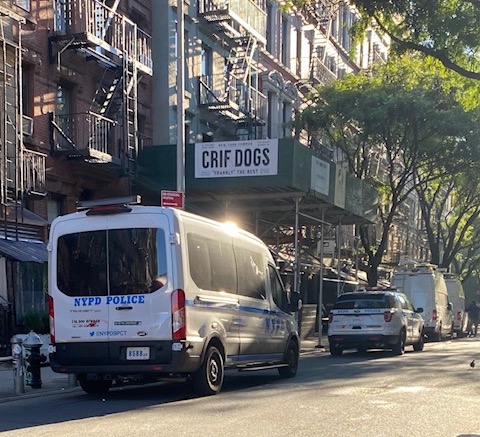 it was at 118 st marks, the dispensary between craft and carry and squish marshmallows

Happened in front of the new dispensary for whatever that's worth.

And to think this used to be such a nice safe neighborhood.

I’ve lived on Saint Marks for many years and while it may seem fun to have all the bars and restaurants booming and the street closed on the weekends— it’s become a nuisance for residents with drunks singing to blasting music literally until 3am in the summer. I don’t want to live on Bourbon Street.
Also I’m not anti-dispensary but 2 weed shops on one block and now a shooting right in front of them Coincidence?

Been on the block for close to 50 years through lots of changes and this iteration is the pits, CB3's total disregard for residents needs and wants is criminal get rid of the sheds limit the # of pot shops and for fuck sake turn it down a notch or 2 so everyone can have a good time however we define that

@Giovanni: You forgot the "sarcasm" tag!

Unrelated but why IS that street still locked off like that? That was some pandemic restriction.