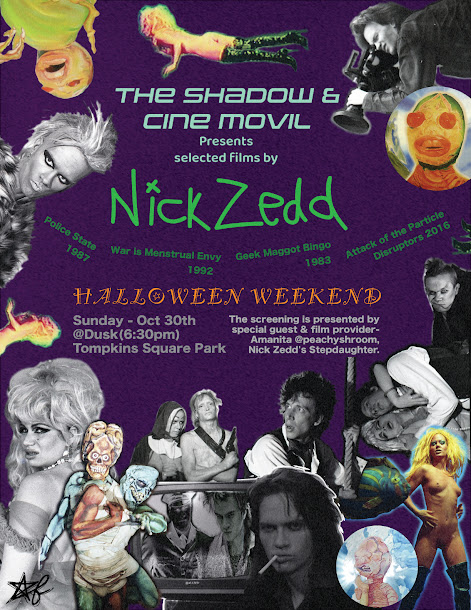 On Sunday evening, you can check a selection of films by the late Nick Zedd in Tompkins Square Park.
The screening will be presented by special guest and film provider — Amanita Funaro, Zedd's stepdaughter.
Here's more via the EVG inbox...

Nick Zedd is an artist from the New York City underground punk scene, who passed away earlier this year. Although mainly known for his films, he was also a painter and author. Nick spearheaded the movement known as Cinema of Transgression — kitschy, violent, sexy, shocking, and featuring a filming style that goes beyond description.
Nick Zedd always felt there was no good way to describe his films other than to just watch and experience them yourself. Tompkins has been known for decades as a park where artists, punks and other creatives come together in different ways.
Back in the 1980s-90s Nick Zedd was always pasting his art around and sharing his zines in Tompkins and the surrounding neighborhood. Which is part of what makes screening Nick Zedd's films here so special.

The lineup, which will last roughly two hours, features:
• Police State (1987)
• War is Menstrual Envy excerpt (1992)
• Geek Maggot Bingo (1983)
• Attack of the Particle Disruptors (2016)
The program is presented by The Shadow and Cine Movil.
Earlier on this Sunday afternoon starting at 1 ... the second annual gathering of Infernites in Tompkins Square Park takes place. Fans of the circus punk cabaret collective The World/Inferno Friendship Society will gather to celebrate the life of their departed lead singer, Jack Terricloth. We'll share more information about this in a separate post.
Posted by Grieve at 11:30 AM

Oh, this is fabulous! Looking forward to seeing the films. Thank you for sharing them.

Loved him nice guy and great artist sad he has passed

Saw Nick's films screened at MOMA's Club 57 exhibit a while back. Definitely captured the East Village noir vibe from back in the good old bad old days. He is missed.

The gathering of Infernites last year was so beautiful, and so so sad.