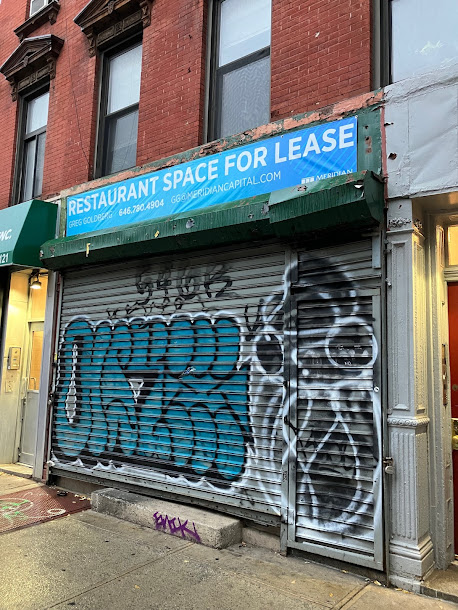 Ownership of Memphis Seoul has signed a lease to open its first Manhattan outpost at 123 First Ave. between Seventh Street and St. Mark's Place. News of the deal was first reported by the @TradedNY account.
This will be the second location for the restaurant, which describes itself as "Southern cookin' with a Korean kick!" (You can check out the menu here.)
Founder Bart Hubbuch opened his first Memphis Seoul in Crown Heights.
In case his name sounds familiar... Per Grub Street: "Originally from Dallas, Hubbuch was a career sportswriter who’d spent 27 years in the business before getting fired from the New York Post for a tweet about Donald Trump winning the 2016 presidential election."
Grub Street also states that "Hubbuch had always been a home cook... and had long been interested in running his own business."
A Memphis Seoul Instagram post lists a 2023 opening.
This address became available after Organic Grill relocated to West Third Street this past spring.
Posted by Grieve at 5:00 AM

Good luck. Every trump hater (besides that Amazon guy...) is our friend.

If he was fired by the NY Post then I will be a regular at this place when it opens.

Thanks, Bill — I fixed that address.

It looks like he got fired for comparing Trumps presidential win to Pearl Harbor and the sep 11th attacks.

Yep… an attack on our country!